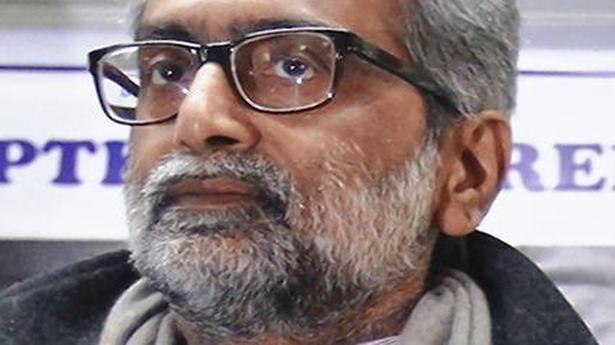 The Bombay High Court on Friday extended activist Gautam Navlakha’s interim relief from arrest for three weeks. Mr. Navlakha has been charged with having Maoist links in the Bhima Koregaon violence.

A Division Bench of Justices Ranjit More and Bharati Dangre was hearing a plea filed by Mr. Navlakha seeking to quash the FIR filed by Pune police against him. The court rejected the plea, but it granted a stay in order to appeal against it in the Supreme Court.

Pune police had earlier contended that activist Gautam Navlakha is a member of CPI(Maoist).

Additional public prosecutor Aruna Pai had previously said that based on the material recovered from other accused — Rona Wilson and Surendra Gadling, it can be proved that Mr. Navlaka had Naxal links and was in contact with terror outfit Hizbul Mujahideen and Kashmir separatists.

Advocate Yug Chaudhary had also contended that siimply presenting some documents in Mr. Navlakha’s name does not prove that he is a “terrorist”. He went on to say that there is no evidence against him and the only available material is what was recovered from the laptops of other accused.

Prime Minister Narendra Modi on Saturday hailed the Indian judiciary for redefining environmental jurisprudence to strike a balance between development and ecological protection. Speaking at the inaugural function of the International Judicial Conference 2020 — ‘judiciary and the changing world’ at the Supreme Court, the Prime Minister referred to gender justice and said no country […]