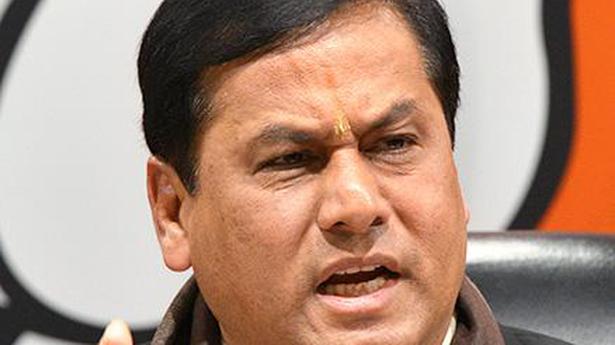 Assam Chief Minister Sarbananda Sonowal on Tuesday claimed that “negative elements” were trying to disrupt the ongoing process to update the National Register of Citizens (NRC) and his government was determined to thwart any such attempts.

Mr. Sonowal also asked “genuine” Indian citizens not to panic as their concerns would be adequately addressed in the mega exercise aimed at identifying those illegal immigrants who had entered the State after 1971.

“There are some groups which are trying to create unrest in Assam in the name of NRC. Our government is determined to thwart any such attempts,” the Chief Minister said.

Mr. Sonowal is in the national capital and he held a meeting with Home Minister Rajnath Singh and top officials of the Union Home Ministry to review the present security scenario in the State and preparation to deal with any possible law and order situation which may arise after the publication of the final NRC.

Mr. Sonowal said grievances of all bonafide Indian citizens will be adequately addressed in the update process of the NRC.

The hype and speculation over the entry of Congress president Rahul Gandhi in the Wayanad Lok Sabha segment has put the Congress in a quandary. Such moves would only thwart a serious bid to unseat the National Democratic Alliance, says CPI State secretary and national secretariat member Kanam Rajendran. Is there any impropriety in Prime […]

The Tirumala Tirupati Devasthanams (TTD) has formally took possession of a prime chunk of land in Mumbai from the Maharashtra government, which was allotted on lease basis to the temple management on Wednesday. Following a request by TTD Executive Officer Anil Kumar Singhal for allotment of land in the city, the Maharashtra government offered 648 […]

High Court closed down till May 3 Source: thehindu.com Related