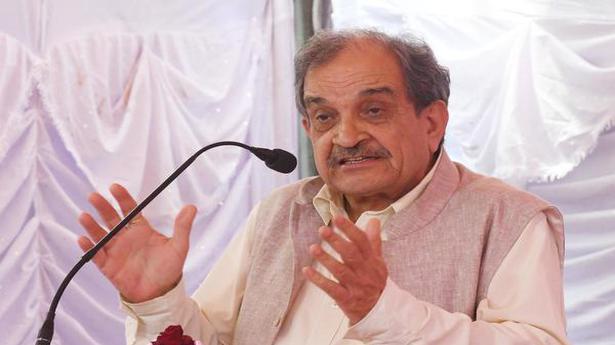 Union Steel Minister Chaudhary Birender Singh, a senior BJP leader from Haryana, on Sunday said he has offered to resign from the cabinet and from the Rajya Sabha.

The announcement, made by the minister during a press conference at his official residence here, followed the selection of his son Brijendra Singh’s name as the BJP candidate from Hisar in Haryana.

The senior leader said he has informed the BJP president Amit Shah about his resignation offer, with which he wants to send across a message of anti-dynastic politics as his son has got the Lok Sabha ticket.

In 2016, he was shifted to Steel Ministry from the Ministry of Rural Development, Panchayati Raj and Drinking Water and Sanitation.

Mr. Singh had joined BJP in 2014 after his over four-decade-old association with the Congress party.

Top priority is being given to horticulture and the financial allocation to the department will also be increase in the near future, said Minister Horticulture and Agriculture K. Kanna Babu. Releasing the new “Horticulture Diary 2020” on Friday, the Minister said that the field of horticulture was developing with great speed, and Andhra Pradesh was […]

A six-year-old girl V. Lakshmi died late on Monday night in a wall collapse at her house at Peddavaduguru village as heavy rain lashed Anantapur district. Motorists had a tough time as the national highway between Anantapur and Ballari in Vidapanakal mandal became impassable for some time on Tuesday morning. A minor irrigation tank breached […]

Three policemen, including a sub-inspector, were on Monday shunted out for sending a notice in the name of a dead person over the December 20 anti-CAA protests, an official said. The action was taken on the basis of an inquiry report submitted by the city circle officer (CO) which found the three policemen guilty of […]