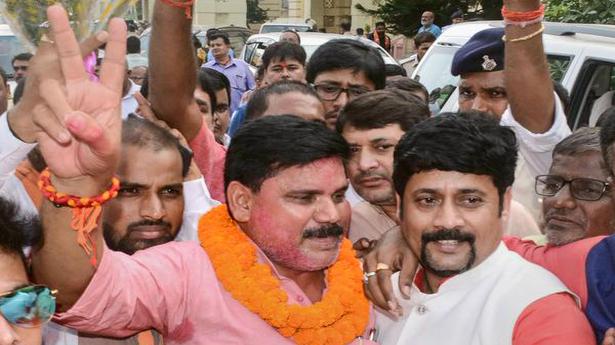 The Bharatiya Janata Party on Wednesday wrested the Rajya Sabha seat in Bihar which had fallen vacant upon the death of former Union Minister Ram Jethmalani, who was elected three years ago on an RJD ticket.

BJP leader Satish Chandra Dubey was declared elected unopposed since no other candidate had filed nomination papers for the byelection.

After the end of the deadline for withdrawal of nomination papers at 3 p.m., Satish Chandra Dubey was declared elected unopposed. He was handed over the certificate inside the Vidhan Sabha premises, State Assembly Secretary Batesar Nath Pandey said.

Jethamalani was elected on a seat from the quota of Chief Minister Nitish Kumar’s JD(U) in 2016, which gave up the claim over the same as a goodwill gesture towards the RJD headed by Lalu Prasad, his then alliance partner who had hired the renowned lawyer’s services in fodder scam cases.

The seat’s tenure was to end in 2022. With the JD(U) back in the NDA camp and enjoying an absolute majority along with the BJP and Ram Vilas Paswan’s LJP in the State assembly, the Grand Alliance headed by the RJD refrained from throwing its hat in the ring.

Credit for Ram temple goes to all, not one party: Sena

Senior Shiv Sena leader Sanjay Raut on Tuesday said his party had laid the foundation for the Ram temple in Ayodhya, and that the credit for the temple construction does not go to any one party. BJP president Amit Shah on Monday said a grand Ram temple would come up in Ayodhya within four months […]

Professionals working in I.T., manufacturing, and media have reported low confidence towards job stability and career progression as companies in the Source: thehindu.com Related

Two weeks after Delhi riots: darkness brings with it panic and fear in Shiv Vihar

As the sun sets over the charred ruins of what was a bustling neighbourhood two weeks ago and the shadows lengthen into night, panic escalates in northeast Delhi’s riot-scarred locality of Shiv Vihar. “Call everybody. It’s time to leave”, Mohammed Nafis calls out urgently to his 14-year-old nephew Saif, asking him to gather the family […]