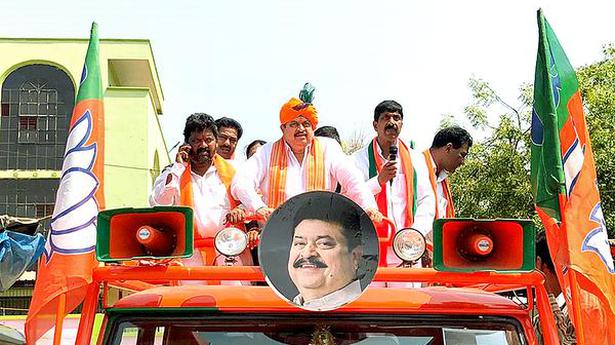 If citizens were to vote for a candidate with a never say die spirit and one with impressive credentials irrespective of the ‘strong’ opponents from other rival political parties, Bharatiya Janata Party’s N. Ramchander Rao should be winning handsomely.

The senior BJP leader, city president, prominent advocate and member of the Bar Council, Mr. Ramchander is contesting from the country’s biggest parliamentary constituency of Malkajgiri for the first time but he has also unsuccessfully contested Assembly elections from the Malakgiri Assembly constituency twice – in 2018 and earlier in 2014, when he lost narrowly.

Now, he has the daunting task of garnering majority support from the seven assembly constituencies of Malakjagiri apart from having to withstand the TRS onslaught in the form of M. Rajasekhar Reddy, son-in-law of Minister Malla Reddy, and Congress fiery leader A. Revanth Reddy.

“This is a national election and there is Modi magic factor with the entire country wanting to give him another term. Our strong cadre can withstand the money or muscle power of other parties,” says Mr. Ramchander, as he interacts with evening walkers at Kukatpally after the temperature has relatively cooled.

The BJP leader, also a sitting MLC, strongly feels the wave is in favour of him this time since the election for choosing a strong government with a decisive leader at the national level. The Narendra Modi led Government’s welfare and development schemes will propel him. “Who can match up to Mr. Modi? KCR stands no chance even if he wins 16 MPs because this an election is between NDA and UPA. People are intelligent enough to realise this and my constituency has most educated voters,” he says.

Mr. Ramchander has been touring the constituency extensively for the last 10 days, taking out padayatras to meet voters personally, taking out rallies, interacting with colony residents, addressing advocates associations, professional bodies and so on from dawn to dusk in areas of Kukatpally, Qutbullapur, Kompally, Malkajgiri and surroundings.

While the sound system blares songs praising Mr. Modi’s leadership, he and his followers greet people and appeal for support with folded hands. Some shake hands, some smile, other wave even as women at a few places greet him with arati.

“Mr. Modi can only provide a strong government to keep the country secure. His five year rule sans any scams has done things which has not been done in last 50 years. If elected I can bring funds from the Centre to develop the constituency,” is the common line of communication with voters.

“I am getting a good response,” he smiles, as his supporters raise full throated slogans hailing his candidature.

Union Minister Ramdas Athawale on Friday alleged that provocative speeches by Congress leaders were responsible for the violence in Delhi, which has so far claimed 42 lives. He was talking to reporters at the press room in the Vidhan Bhavan here, where the Budget session of Maharashtra Legislature is currently on. The Minister of State […]

Data | The Nizamuddin cluster and the coronavirus spread

In many COVID-19-affected nations, the case count started rising exponentially after health workers discovered a group of people who got infected at one place and mostly at the same time. Such groups are termed “clusters”. In South Korea, close to 56% of the infections emerged from a church frequented by an infected woman. In Singapore, […]