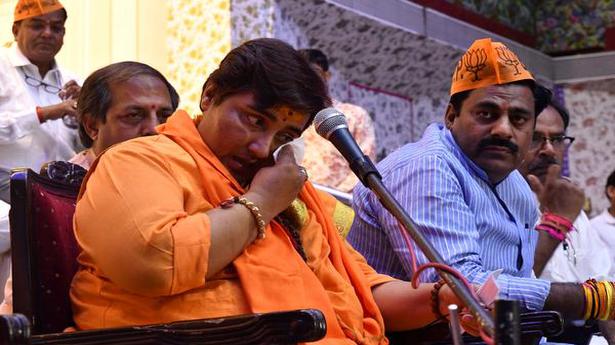 The BJP on Friday distanced itself from Pragya Singh Thakur’s controversial comment that IPS officer Hemant Karkare died in the 26/11 Mumbai terror attacks as she had cursed him. The party said it was her personal view which she might have made “due to years of physical and mental torture”.

“The BJP believes that Karkare died while bravely fighting terrorists. The BJP has always considered him a martyr, ” the party said in a damage-control exercise.

The party, which has fielded Malegaon blast accused Ms. Thakur from Bhopal in the Lok Sabha election, claimed she had suffered “physical and mental torture” for years in police custody that might have caused her to make such a statement.

Hemant Karkare, who headed the Anti-Terrorist Squad died in the Mumbai terror attacks in 2008.

Addressing BJP workers in Bhopal, Ms. Thakur claimed Karkare died as she had “cursed” him for “torturing” her in custody.

The government will introduce three Bills in the Lok Sabha today— the Taxation Laws (Amendment) Bill, the International Financial Services Centres (IFSCs) Authority Bill and the The Recycling of Ships Bill, 2019. Another Bill listed for consideration and passing is the Prohibition of Electronic Cigarettes (Production, Manufacture, Import, Export, Transport, Sale, Distribution, Storage and Advertisement) […]

New guidelines to appear as party in person in High Court

The Madras High Court has put in place new guidelines for litigants, who wish to appear as party in person. Such litigants now have to obtain a certificate from the Party-in-Person Committee. According to the High Court of Madras (Conduct of Proceedings by Party-In-Person) Rules, 2019, notified recently, when a party wants to appear and […]

Ahead of the curve

Karnataka B.S. Yediyurappa The political school that Karnataka chief minister B.S. Yediyurappa belongs to never believed in the power of social media. But in the past three weeks, he has turned to it, again and again, to be seen and, more importantly, be heard. The CM has been addressing people through social media channels at […]