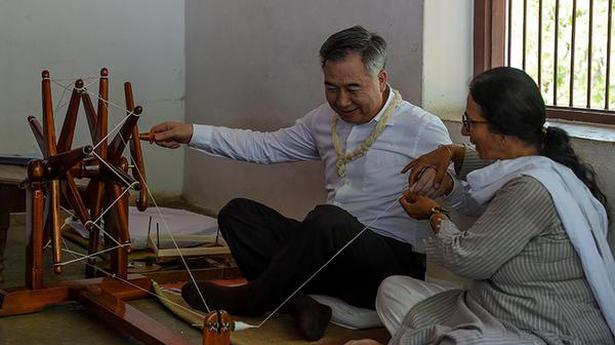 Amid the din of the Lok Sabha election and government formation at the Centre, the visit of a delegation from the Communist Party of China (CPC), the first after the Doklam stand-off ended, to the BJP headquarters in New Delhi went largely unnoticed, but will have a bearing on the future institutional connectivity between the two parties.

Senior BJP general secretaries Ram Madhav and Bhupendra Yadav, along with the party’s foreign affairs cell head Vijay Chauthaiwale, played host to Li Xi, a member of the Politburo of the CPC and secretary of the CPC Guangdong Provincial Committee, last Thursday. Mr. Li met members of the Congress, but the BJP’s interest in a visit by the Chinese delegation was noteworthy.

“After the Modi government first came to power in 2014, there was a flurry of exchanges spurred on not just by the BJP’s interest but also great interest among the Chinese. We sent a woman-only delegation, a delegation of Mayors, etc., to China, plus some institutional exchanges via the India Foundation, a think tank associated with the party,” said a senior source in the party. The Doklam stand-off in June 2017, however, put paid to this bonhomie as tensions escalated, with the BJP taking a strong view of the matter.

“For many years there had been attempts to draw up some institutional connectivity between the two parties. When Nitin Gadkari was party president, he led a high-level delegation to China, but since 2017, we have not been able to move forward,” said the source.

“With the new government in place and the Doklam issue out of the way, we are considering a high-level visit on behalf of the party in the coming months. We are awaiting some organisational clarity, with party chief Amit Shah joining the government, to start planning such a visit,” added the source. Such connectivity among political parties helps governments in pushing ideas via back channels and strengthening non-official diplomacy.

The attempt to start again from scratch, from both sides, may be an important clue to the foreign policy imperatives of both countries.

‘No reduction in number of bank branches in Kadapa’

There is no reduction in the number of bank branches in Kadapa, an Aspirational District, Union Minister of State for Finance Anurag Singh Thakur informed the Rajya Sabha on Tuesday. Answering an unstarred question raised by YSRC Parliamentary Party Leader V. Vijaya Sai Reddy, the Union Minister said that banking outlets were one of the […]

Noted Tamil Scholar and orator Silamboli Su. Chellappan died this morning due to age-related illness at his residence in Kalashetra Colony, Thiruvanmiyur. He was 91. Mr. Chellappan was born in Siviyampalayam, near Namakkal. He began his career as a mathematics teacher and later obtained a doctorate in Tamil. He held posts such as director of […]