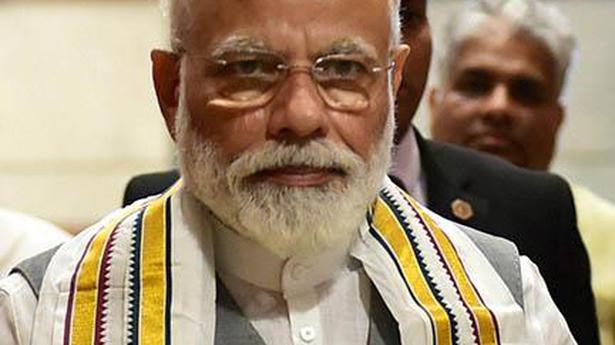 The BJP’s Parliamentary Board, the party’s highest decision-making body, met in New Delhi on Friday and decided to finalise a seat- sharing agreement with the All Jharkhand Student’s Union (AJSU).

Of the 14 seats in Jharkhand, the AJSU will fight the Giridih Lok Sabha seat and the BJP will contest the rest. BJP general secretary Bhupendra Yadav made the announcement after the three- hour meeting, attended by Prime Minister Narendra Modi and party president Amit Shah.

He added that Mr. Shah had met AJSU president Sudesh Mahto in New Delhi to finalise the arrangement.

Sources at the meeting said the board reviewed feedback sent by party MPs of their Lok Sabha constituencies.

Significantly, the board also greenlighted the proposal allowing Rajya Sabha MPs and party MLAs to be considered for Lok Sabha tickets. “There are several Ministers who are Rajya Sabha members who have shown an interest in fighting polls,” said the source.

Four new Supreme Court judges took oath of office on Monday, taking the total strength of judges in the apex court to 34. Chief Justice of India Ranjan Gogoi administered the oath of office and secrecy to justices Krishna Murari, S. Ravindra Bhat, V. Ramasubramanian and Hrishikesh Roy in a simple function in courtroom one. […]

Trump to visit India ‘at some point’

U.S. President Donald Trump said he would visit India at some point. “He [Mr Modi ] wants me to go there. I will be going, at some point, to India,” Mr. Trump said. In response to a question on a potential trade deal with India, Mr. Trump said India and the U.S. were “dealing with” […]