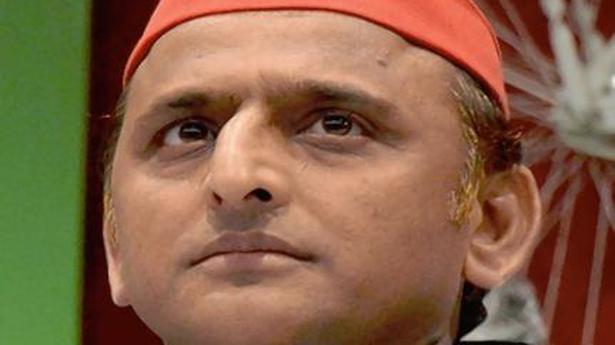 A BJP leader in Uttar Pradesh has been booked under the stringent Scheduled Castes and Scheduled Tribes (Prevention of Atrocities) Act for allegedly burning the photos of BSP supremo Mayawati and SP president Akhilesh Yadav during a Holika Dahan event in Barabanki.

The incident took place on March 20 and an FIR was filed at Ramnagar police station in Barabanki late on Friday, the police said on Saturday. The case was registered against Rambabu Dwivedi, State vice-president of the BJP Kisan Morcha.

According to the complaint lodged by SP MLC Rajesh Yadav, Mr. Dwivedi, along with others, burned pictures of Ms. Mayawati and Mr. Akhilesh Yadav during the festival and hurled sexist and casteist abuses at the leaders. A video of the event was also shared on social media.

“Even today people of savarna caste want to oppress Dalits and OBCs and they have made their intentions known by setting on fire pictures of leaders of Dalits,” said the MLC in his complaint, adding the video was shared to instigate riots.

“A probe is on,” the Barabanki police said on Twitter.

Mr. Akhilesh Yadav said the Holika Dahan had sent a clear message that “Dalits and OBC communities will be suppressed and burned under the BJP rule just like they have been for centuries.” “The BJP will soon face the wrath of the deprived sections,” Mr. Akhilesh Yadav tweeted.

Mr. Dwivedi, however, sought to justify the incident. “It was not to personally hurt anyone. The event was an effigy burning of the forces of anarchy, corruption and goondaism,” he told The Hindu.

Kashmir’s famed apple is battling to get exported outside the State this year. From suspected militants campaigning against the fruit’s export to the government’s inability to rope in enough trucks, the Centre’s Special Market Intervention Price Scheme (MISP) is now providing much-needed assistance to growers’ hopes of salvaging the ₹16,000 crore apple industry amid the […]

As Bangladesh Prime Minister Sheikh Hasina returns to Dhaka and is set to address a press conference on Wednesday following her Delhi trip, she may have to confront uncomfortable questions related to a murder. A student of the country’s elite technical institute Bangladesh University of Engineering and Technology [BUET] was allegedly murdered last weekend soon […]

They stage protest against the decision to allow sale of BPL grade variety Source: thehindu.com Related