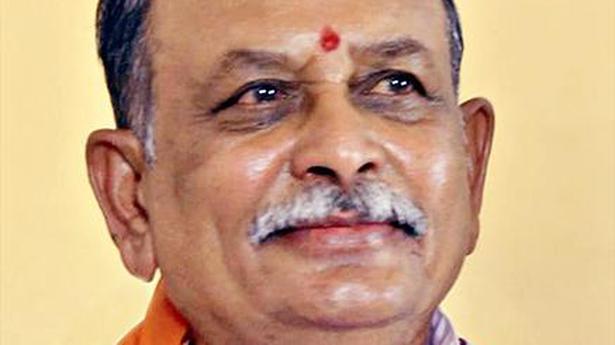 The selection of Devendrappa, who recently quit the Congress, as BJP candidate for Ballari Lok Sabha seat, is being seen as an indication that the party is looking beyond the ‘Ballari Reddy brothers’ to wrest this seat from the Congress.

The BJP, which hitherto depended mainly on the Reddy brothers, especially the former Minister B. Sriramulu, for issues related to Ballari, now appears to be looking towards “rebel” Congress leaders from Belagavi as Mr. Devendrappa happens to be their relative. Also, there were talks that the Jarkiholi brothers of Belagavi were likely to take an active interest in Ballari politics, in place of the Reddy brothers, to consolidate the Valmiki (Naik) community; and that they might have sought the ticket to Mr. Devendrappa. Jarkiholis’ sister is Mr. Devendrappa’s daughter-in-law.

The selection of Mr. Devendrappa is being interpreted in political circles as the beginning of decline of Reddy brothers’ political hold in the mining district. The BJP was forced to look beyond Reddy brothers especially after J. Shanta, Mr. Sriramulu’s sister, suffered a humiliating defeat in the recently held byelections to Ballari Lok Sabha seat.

The Reddy brothers’ group had no candidates other than Ms. Shantha, Sanna Fakirappa and T.H. Sureshbabu, both of whom had lost the 2018 Assembly polls.

Meanwhile, Mr. Sriramulu said on Friday that party leaders in the district had unanimously recommended Mr. Devendrappa to be fielded as the candidate.

Mr. Devendrappa, who hails from Arsikere of Harapanahalli taluk, is not entirely unknown to Ballari as he has been in politics for over three decades.

He was a staunch follower of the late Janata Parivar leader M.P. Prakash and was vice-president of Ballari ZP in the 1990s. However, his political activities were shifted to the neighbouring Davanagere district as Harapanahalli was included in it in 1997. He joined the Congress along with Mr. Prakash in 2008. He unsuccessfully contested from Jagalur Assembly constituency twice. His wife is a member of the zilla panchayat representing the Congress.

When asked what prompted him to shift his loyalty from the Congress to the BJP, Mr. Devendrappa said, “I was denied opportunity to harvest the crop which I cultivated by toiling hard.”

The price of auto liquefied petroleum gas (LPG) and non-subsidised LPG cylinders have seen a surge. Cylinders weighing 14.2 kg has increased by ₹144.50 to ₹149. This is the steepest since January 2014. The subsidy to domestic users have almost doubled. It has been increased from ₹153.86 to ₹291.48 Domestic users are entitled to get a total of 12 cylinders […]

While immigration remains a burning issue in almost every American presidency, the latest proclamation has additional significance for coming less than five months before the next presidential election Source: thehindu.com Related

The top trade official from the Trump Administration said the U.S. is currently in a big trade negotiations with India. Source: thehindu.com Related