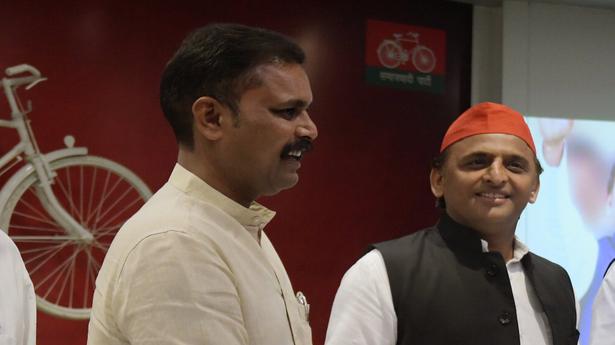 Annoyed over being denied ticket in the 2019 Lok Sabha election, BJP MP from Hardoi seat in Uttar Pradesh Anshul Verma on Wednesday quit the party and joined the Samajwadi Party.

However, the episode stood out for the manner of the resignation. Mr. Verma handed over his resignation letter to the chowkidar (watchman) of the BJP state headquarters in Lucknow.

The Dalit MP from Hardoi, a reserved constituency, also handed over a day’s wages to the watchman, as he taunted the BJP over his chowkidar campaign led by Prime Minister Narendra Modi.

Addressing the media, Mr. Verma claimed that the BJP denied him the seat for not writing chowkidar on his social media wall.

“Vikas kiya hai vikas karenge, chowkidar nahi Anshul hi bane rahenge (I have done development and will continue to do so. I will remain Anshul and not become some chowkidar),” said Mr. Verma.

In 2014, Mr. Verma won the Hardoi seat in central Uttar Pradesh after securing 3.60 lakh votes against the BSP’s 2.79 lakh. However, in the first list of candidates released by the BJP last week he found himself among the six sitting MPs who had been replaced apparently for not performing up to the mark.

Linking it to their caste identity, as four out the six MPs replaced were Dalits, Mr. Verma asked “are only MPs from the Dalit society sluggish?”

The BJP has fielded Jai Prakash Rawat from Hardoi this time. Mr. Rawat, a Pasi like Mr. Verma, is a former four-time MP from Hardoi and Mohanlalganj.

Explaining reasons for quitting the BJP, Mr. Verma said he was hurt that after his ticket was cut, no responsible BJP leader saw it fit to talk to him or give him an appointment to meet. He also said he was disappointed after the BJP did not act on his complaint on the distribution of liquor to people who attended a Pasi sammelan organized at a temple in Hardoi in January by BJP leader Naresh Agarwal and his son Nitin.

Taunting the BJP over its chowkidar campaign, Mr. Verma dared BJP leaders adding chowkidar to their names to take care of the wages of at least 10 watchmen in their areas and stand guard in their locality in place of the chowkidar for one night every month.

At least seven persons were killed and 15 severely injured when a commercial vehicle carrying passengers went out of control and crashed into an incoming State Road Transportation Corporation bus here on Tuesday afternoon. The vehicle reportedlylost control when one of its tyres burst near Chennaram village in Kondamallepally mandal at around 1.30 pm and […]

Government issues orders to merge some villages into Tadepalli, and Mangalagiri Municipalities

The State government has issued GOs (Government Orders) facilitating the merger of a few villages with Tadepalli and Mangalagiri Municipalities. Following resolutions of the Gram Panchayats (GPs) and Municipal Council of Mangalagiri, the government issued orders for inclusion of the GPs, including, Atmakur part of the Atmakur GP, Nowluru part of the Nowluru GP (existing […]