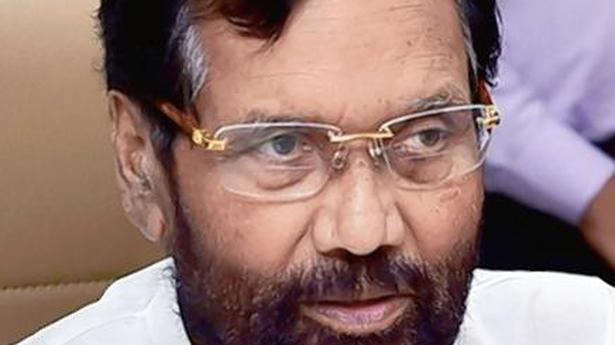 “We welcome Amit Shah’s statement; it has put an end to all doubts and speculation,” Mr. Paswan said. “We at LJP have been saying that there is no need to even question on who will lead NDA in 2020 Bihar Assembly polls,” the LJP leader added.

The LJP had always worked as a cementing force, he asserted and said that the party would work to keep the alliance intact. “The BJP never directly questioned Nitishji’s leadership; the media gave unwarranted importance to statements of a few BJP leaders,” he added.

Speculation on the fate of the alliance was triggered by remarks made by BJP legislator Sanjay Paswan, who had said that Mr. Kumar “should make way for a BJP CM”.

Asserting that there were no differences between the cadres of the BJP and the JD(U), the LJP leader said that the two parties had worked in tandem for the bypolls in five Assembly constituencies and the Lok Sabha constituency of Samastipur.

Mr. Paswan added that it was in everyone’s interest that the alliance remained intact. When it comes to seat distribution, however, the NDA, with just three partners, is likely to face some tough negotiations. The LJP wants to contest about the same number of seats as in 2015, when it had contested 42 and won two.

The BJP had fought in 157 seats in the last election, out of which it won 53. Even though it has agreed to Mr. Kumar’s leadership, it has made it clear that it will contest an equal number of seats as the JD(U) or more.

On November 28, Mr. Paswan is set to step down as president of the LJP and pass the baton to his son Chirag Paswan. The senior Paswan asserted that unlike many recent generational transitions, his party’s electoral fortunes wouldn’t be affected by the change. “Mulayam Singh [Samajwadi Party leader] was forced to step down by his son. That is not the case here, I have been wanting Chirag to take over,” Mr. Paswan added.

The Edappal grama panchayat has launched a programme to convert the 33 anganwadis under its jurisdiction into centres of excellence. The anganwadi facelift programme is being implemented in association with Patha Foundation, an Edappal-based charity organisation. A workshop was organised for anganwadi teachers as part of the Poompatta programme. Trainer Vandana Rao led the workshop. […]

The Gopalakrishnan-Deshpande Centre for Innovation and Entrepreneurship of the Indian Institute of Technology-Madras and the Confederation of Indian Industry-Sohrabji Green Business Centre signed an agreement to promote startups that venture into cleantech space. R. Raghuttama Rao, Chief Executive Officer, GDC, said: “Start-ups in the cleantech and green businesses form 20-25% of the disruptive ideas emanating […]