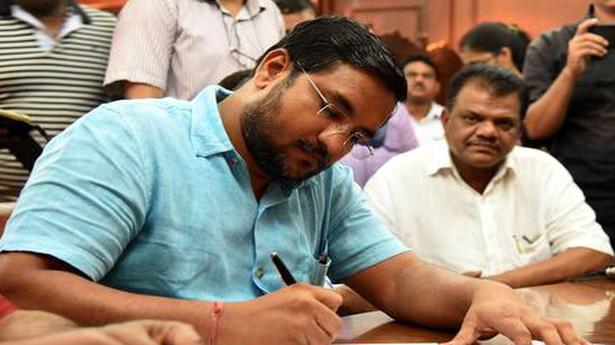 Mr. Kuncolienkar, a two-time BJP MLA from Panaji, is a close aide of Parrikar.

Sources in political circles in Panaji said the announcement of former Goa RSS chief Subhash Velingkar to contest the seat on Saturday had resulted in the BJP opting for the experienced Mr. Kuncolienkar over Mr. Utpal.

A senior office-bearer also said with the entry of Mr. Velingkar, the contest would be a difficult one something the party seniors did not wish Mr. Utpal to face in his electoral debut.

Mr. Kuncolienkar was first elected MLA in 2015 after Parrikar joined the Narendra Modi Cabinet as Defence Minister and was elected to the Rajya Sabha from Lucknow, after he vacated the Panaji seat.

In the 2017 Assembly election, he was again elected MLA from Panaji but had to resign after Parrikar returned to the State politics as Chief Minister of the BJP-led coalition.

Mr. Kuncolienkar faces Atanasio Monserrate of the Congress, Valmiki Naik of the Aam Aadmi Party and Mr. Velingkar of the Goa Suraksha Manch.

Following the shortage of maize to the tune of three lakh tonnes in Karnataka which has already hit the poultry sector, the Centre has notified import of one lakh tonnes of yellow maize (feed grade) under the TRQ (tariff rate quota) scheme. The estimated shortfall in the country is 15 lakh tonnes. Karnataka Poultry Farmers […]

Prime Minister Narendra Modi was on Wednesday conferred the ‘Global Goalkeeper’ award by the Bill and Melinda Gates Foundation for the Swachh Bharat Abhiyan launched by his government. In a series of tweets in Hindi, the Prime Minister’s Office (PMO) said Mr. Modi lauded the countrymen for contributing to the grand success of the cleanliness […]

The Raichur Division of Life Insurance Corporation (LIC), the State-owned insurance company, has recorded an outstanding performance in 2018-19 by collecting first premium worth ₹218.35 crore. Addressing a media conference at his office here on Sunday on the occasion of the company’s 63rd Foundation Day, K.R. Venkatesh Prasad, the senior divisional manager, said that his […]