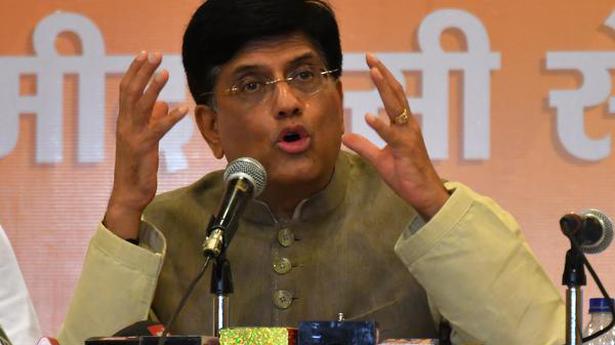 The CPI(M), the Congress and a section of the Trinamool questioned Mr. Goyal’s “credibility” as he had criticised an eminent economist.

Defending Mr. Goyal’s, BJP national secretary Rahul Sinha said: “Those who have foreigners as their second wife are only getting Nobel [Prize]. I do not know if that is a condition to get a Nobel or not. What Mr. Goyal said is correct. The economy is being converted to a Left-wing policy framing system…”

Congress MP Pradip Bhattacharya said: “That he is a Leftist and thus his view on the NYAY scheme is rejected — this is the most ridiculous argument”

The government will tap solar power in a big way to make the State power surplus, Energy Minister Balineni Srinivasa Reddy said on Sunday. He said the YSR Congress Party government had prepared an action plan to generate 10,000 MW of power from the renewable source of energy. This includes an installed solar power capacity […]

The Enforcement Directorate has arrested NRI businessman C.C. Thampi in connection with a London property that was earlier bought by defence dealer Sanjay Bhandari, said a senior official on Monday. It is alleged that a Dubai-based company, Sky Light, through which the property was acquired, was controlled by Mr. Thampi. The ED last year recorded […]

The Enforcement Directorate has provisionally attached assets worth ₹.1,489 crore in the case of embezzlement of public deposits in Adarsh Credit Cooperative Society Limited (ACCSL). The properties belong to the Adarsh Group of Mukesh Modi, Virendra Modi and his family; Mahendra Tak and Saurabh Tak of Riddhi Siddhi Group and other accused persons, said the […]