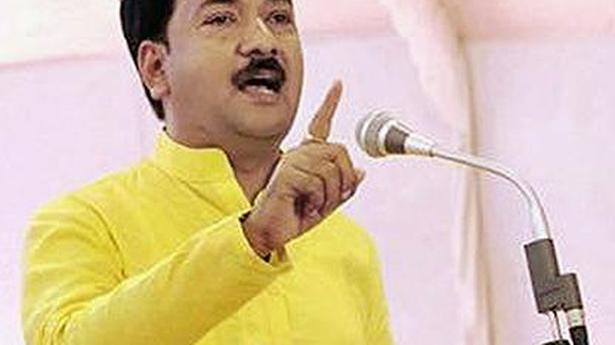 Speculation on the change were rife since the ruling party announced Ms. Wagh’s candidature last month.

The 40-year-old Mr. Patil, a first-time MLA, filed his nomination papers to the returning officer on Wednesday alongwith an affidavit from the party declaring him [Mr. Patil] as the BJP’s official candidate from Jalgaon. Today was the last day of filing of nominations for this seat which goes to polls on April 23.

Ms. Wagh, a BJP loyalist said to be close to senior BJP leader Eknath Khadse, and her husband Uday Wagh, who is president of the BJP’s Jalgaon district unit, dubbed the decision as a “cold-blooded murder”.

“I have diligently worked for the party for the last 40 years. Despite filling the AB form, a candidate who joined the party barely four years back is given a ticket. This is akin to a cold-blooded murder,” said a disappointed Ms. Wagh, reacting to Mr. Patil’s sudden candidature.

While she said she would continue to canvass for the newly announced candidate [Mr. Patil], Ms. Wagh disapproved of the way in which she has been shunted.

The BJP had earlier announced Ms. Wagh’s candidature by dropping its two-time sitting MP, A.T. Nana Patil, sparking disgruntlement among his supporters. Mr. A.T. Patil had defeated his NCP rival by a margin of over 3.5 lakh votes in 2014.

According to party insiders, while Ms. Wagh has a strong hold on her constituency, most local BJP (and Sena) leaders harbor deep-seated grudges against her husband, Uday Wagh, who is unpopular due to his abrasive behaviour.

Unmesh Patil was chosen as the replacement to quell factionalism within the party’s Jalgaon unit. He is said to be the choice of BJP minister Girish Mahajan, who calls the shots in Jalgaon district.

Mr. Patil faces NCP’s Gulabrao Deokar, a former Maharashtra Minister of State who was arrested twice — in 2012 and in 2013 — in connection with the multi-crore Gharkul housing society scam.

A 31-year-old Chinese national, who was placed under isolation at Naidu Hospital in Pune for suspected exposure to novel coronavirus (COVID-19), left a handwritten message thanking doctors and nurses for their good work. He was isolated after he vomited mid-air in a Air India flight. While he tested negative, he was discharged on February 11, […]

Police personnel need to work with determination and keep their inspiration intact in the days to come to tackle the COVID-19 as lockdown will be implemented more stringently, according to Kurnool Superintendent of Police Fakkerappa Kaginelli. Distributing gloves, goggles, masks, and sanitisers to the police personnel at Kondareddy Buruju on Wednesday in the presence of […]