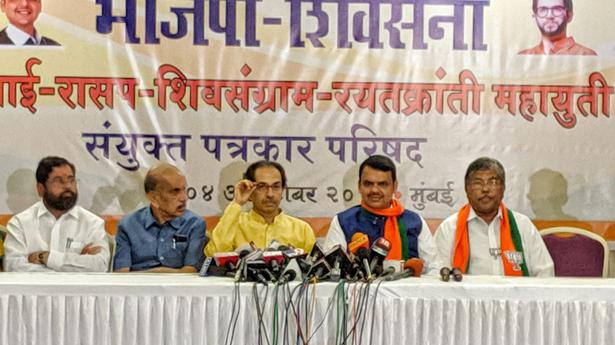 Despite differences, the BJP and Shiv Sena share the “common thread” of Hindutva and will retain power in Maharashtra after the October 21 Assembly polls, Mr. Fadnavis said here on Friday.

He also said that the ‘Mahayuti’ alliance comprising BJP, Sena and other parties will get an unprecedented victory in the elections.

Aaditya Thackeray, son of Uddhav Thackeray, will win the Worli seat Assembly poll by polling the highest number of votes, the CM added.

He also said he will ask all rebel BJP candidates to withdraw from the poll arena in the next two days.

To a query on why some senior leaders, including cabinet ministers were not fielded by the BJP, the CM said: “nobody has been dropped, they have only been reassigned responsibilities.”

The TTD, which is expecting a huge pilgrim turnout for the New Year, ‘Vaikuntha Ekadasi’ and ‘Dwadasi’ days, has decided to temporarily dispense with “privileged darshan” extended to certain categories of the pilgrims. Senior citizens, special citizens and parents with infants will not be extended the privileged darshan from December 31 to January 1 and […]

The Ministry of Home Affairs (MHA) is holding consultations with the Union Territories of Jammu and Kashmir (J&K) and Ladakh to grant them “special status” on the lines of Article 371 of the Constitution, a senior government official said. The said provision is applicable in States of Maharashtra, Gujarat, Nagaland, Assam, Manipur, Goa, Andhra Pradesh, Sikkim, […]