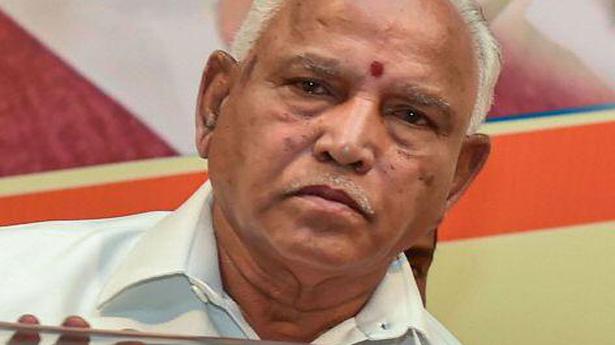 The call on the ministerial expansion/reshuffle in Karnataka now rests with the Bharatiya Janata Party high command, as national president J.P. Nadda, who held consultation with Chief Minister B.S. Yediyurappa on Wednesday, told him that central leadership would convey its decision in two to three days.

The Chief Minister’s camp was hopeful of an immediate green signal as the exercise has been pending.

Mr. Yediyurappa, who was in New Delhi for consultations on the matter, told presspersons after the meeting that Mr. Nadda was expected to discuss the issue with other central leaders and decide on whether it should be an expansion or a reshuffle.

The Chief Minister said he had appealed to the central leadership to give early clearance, as the next Legislature session would commence from December 7.

“Mr. Nadda has told us that the central leadership would get back to us in two to three days,” the CM said.

Meanwhile, State part leaders feel that the chances of effecting a ministerial expansion before the winter session may become bleak if the process is not taken up within this month.

Reshuffle or expansion is generally not taken up just ahead of legislature session, they point out.

Presently, the State has seven vacant ministerial berths, including the one vacated by C.T. Ravi on his elevation as the party national general secretary.

The CM is said to be favouring the idea of keeping two berths vacant as part of A strategy to douse any discontent among disappointed aspirants.

Of the five berths that could be filled up, he wants to reserve three for those who migrated to the BJP from other parties, such as MLCs R. Shankar and M.T.B. Nagaraj and newly-elected MLA Munirathna.

The names of party old-timers such as Umesh Katti and Arvind Limbavalli are also being heard prominently for the remaining two seats.

But, everything would depend on the decision to be taken by the party high command, observes a party senior leader.

The Isak-Muivah faction of the National Socialist Council of Nagaland or NSCN (IM) has warned of “ugly aftermath” if the Centre fails to clarify on th Source: thehindu.com Related

Properties worth about ₹1,600 crore, said to belong to ousted AIADMK leader V.K. Sasikala, have been provisionally attached under the provisions of the Benami Transactions (Prohibition) Act, Income Tax department sources said on Monday. The nine properties, located in Chennai, Puducherry, and Coimbatore, were allegedly procured after the November 8, 2016, demonetisation, the sources said. […]

Anti-CAA protest: After Mamata, BSP and AAP to stay away from meet convened by Congress

The Bahujan Samaj Party (BSP), Trinamool Congress, and Aam Aadmi Party will not be attending the the Opposition meet convened by the Congress to decide on a joint strategy on the Citizenship (Amendment) Act (CAA) and the proposed nationwide National Register of Citizens (NRC). Shiv Sena, the Congress ally in Maharashtra, has also said it […]