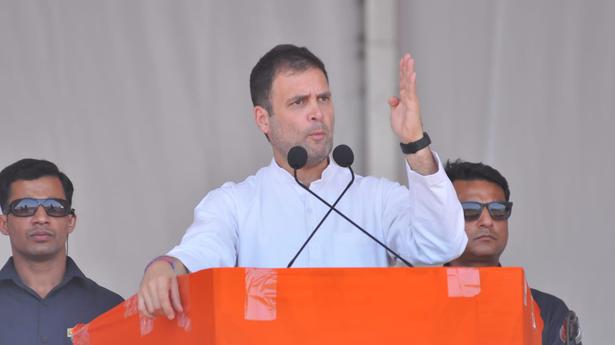 In a scathing criticism of the BJP’s manifesto for the upcoming Lok Sabha polls, Congress president Rahul Gandhi on Tuesday said it was the voice of “an isolated man”, besides being “short sighted” and “arrogant.”

The ruling Bharatiya Janata Party (BJP) released its manifesto for the up-coming General Election starting from April 11, promising to implement the NRC in different parts of the country to push out infiltrators and zero tolerance to terror while reiterating its pet causes — construction of the Ram temple in Ayodhya and scrapping of Articles 370 and 35A, dealing with Jammu and Kashmir’s special status.

The Congress had dubbed the BJP’s election manifesto a “Jhansa Patra” (deception document) and a “bubble of lies” on Monday and said it would have been better had the saffron party issued a “maafinama” instead.

The government is planning to showcase the development in the northeast region, and in particular, the 12 projects funded by Japan (Overseas Development Assistance or ODA) when Prime Minister Shinzo Abe arrives in India for the 14th India-Japan annual summit next month. Clearance from Japan on plans for him and Prime Minister Narendra Modi to […]

The trio were among thousands of migrant workers who have set out on foot for their home states from Maharashtra in the last few weeks amid lockdown on account for coronavirus. Source: thehindu.com Related

In a big blow to senior Congress leader P. Chidambaram, the Delhi High Court on Tuesday dismissed the anticipatory bail moved by the former Union Finance Minister in connection with the INX Media case. “Bail application dismissed,” Justice Sunil Gaur said. The case relates to a First Information Report (FIR) registered by the CBI on […]