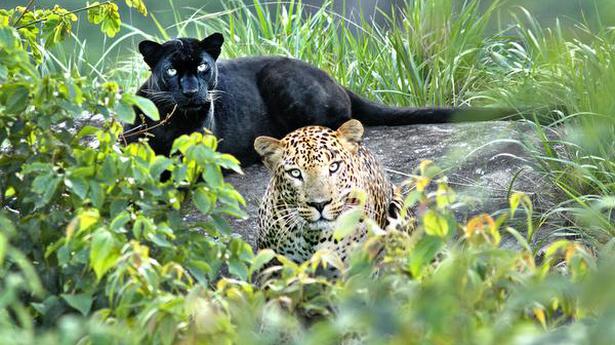 A melanistic leopard, commonly known a black panther, was recently photographed in the wild in the Nilgiris.

The image, which was captured by an amateur photographer Das Chandrasekar shows the melanistic leopard along with its more commonly coloured counterpart with its bright orange coat with black rosettes, near a tea estate in the Nilgiris forest division.

Speaking to The Hindu, Mr. Das Chandrasekar said that he had been trying to photograph a melanistic leopard for over three years. “There had been a number of sightings of black panthers in the area where I eventually managed to take the picture, so I kept persisting with trying to track down at least one animal,” said Mr. Chandrasekar, adding that the black panther in the picture is a female, while the animal with the normal coloration pattern was a male. “The two animals were in courtship, so I quickly took the picture without disturbing them and left the area,” said Mr. Chandrasekar, who has recorded over 20 different individual leopards in and around Kotagiri over the last few years.

Conservationists said that sightings of melanistic leopards were not uncommon in the Nilgiris, especially in Kotagiri and parts of the Sigur plateau.

N. Mohanraj, a conservationist based in the Nilgiris, said that a single litter of an adult leopard could contain both melanistic and non-melanistic, “normal,” coloured cubs. “The coloration is because of a gene mutation. So black panthers as they are commonly called, are not a separate species,” said Mr. Mohanraj, adding that melanistic leopards are not an uncommon sight in and around Kotagiri.

“Usually, they hide out in caves and are easily spotted when they venture out, especially during the day time,” said Mr. Mohanraj.

Patidar community leader Hardik Patel on Friday extended support to the protest by the students of Jawaharlal Nehru University (JNU) against the hostel fee hike. In a message posted on his Twitter handle, he said the students are not fighting a battle for themselves but for the coming generations. He said there is a “conspiracy […]

Karnataka #AskSiddaramaiah Former Karnataka Chief Minister and coalition coordination committee chairman Siddaramaiah will be live, fielding questions on Twitter on Tuesday. In a tweet sent out on Sunday, he said he would be live from 2.30 p.m. and invited people to questions with the hashtag #AskSiddaramaiah. Telangana For the first time, TDP not to contest […]