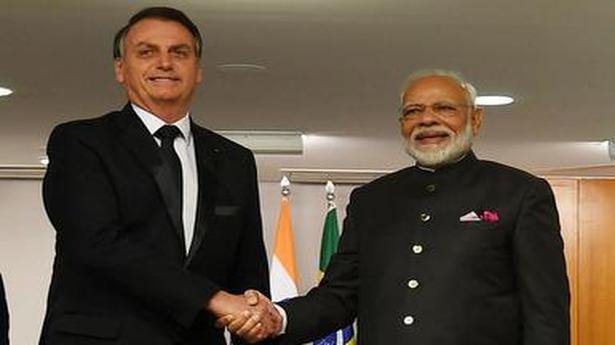 Mr. Modi, who is in Brazil for the 11th BRICS Summit which will focus on building mechanisms for counter-terrorism cooperation and strengthen India’s ties with the world’s five major economies, met Mr. Bolsonaro on the sidelines of the meeting and spoke about diversifying cooperation for the benefit of the people.

Prime Minister Modi invited Mr. Bolsonaro to the Republic Day, 2020. The Brazilian President has accepted the invitation with pleasure, according to an official statement.

“Both leaders agreed that on this occasion, the two countries can comprehensively enhance our strategic partnership,” it said.

The Brazilian President expressed his readiness and informed Prime Minister Modi that a large business delegation will accompany him to India, it said, adding that the two leaders also discussed other areas of cooperation including space and defence sectors.

Mr. Modi said that he looked forward to discussing matters relating to trade. He also outlined areas for potential investment from Brazil, including in areas of agricultural equipment, animal husbandry, post-harvest technologies and biofuels, the statement said.

Also read: Putin meets Modi at BRICS, invites him for Victory Day celebrations in May

They discussed ways to enhance the bilateral strategic partnership.

The Brazilian President expressed his readiness and informed Prime Minister Modi that a large business delegation will accompany him to India, it said, adding that the two leaders also discussed other areas of cooperation including space and defence sectors.

“Deepening the bond with Brazil. Fruitful talks between PM @narendramodi and President @jairbolsonaro. The two leaders spoke about diversifying cooperation for the benefit of our people,” Mr. Modi said on Twitter.

Mr. Modi also welcomed the decision of the President to grant visa-free travel to Indian citizens.

“Building on the India – Brazil Partnership! PM @narendramodi held fruitful discussions with Brazilian President @jairbolsonaro giving further boost to the strategic partnership between the countries based on common global vision and shared values,” he said on Twitter.

Also read: Economy to be main topic at BRICS

The two leaders are meeting over four months after they met in Osaka, Japan for the two-day G20 Summit during which Mr. Modi congratulated Mr. Bolsonaro on being elected as the President of Brazil and welcomed him in the BRICS family.

Mr. Modi and Mr. Bolsonaro held wide-ranging discussions on bilateral relationship, specially cooperation in trade and investment, agriculture and bio-fuels in the context of climate change, “deepening the close and multifaceted” strategic partnership.

The Brazilian President, who was elected in January, announced last month that Indian tourists would be exempted from visas to enter Brazil for tourism or business.

There will be no reciprocity in the beginning. (The) U.S., Australia, Japan and Canada are already exempt from short-term tourist and business visas. The next country should be India, he was quoted as saying by Brazilian newspaper Folha de S.Paulo.

Last week, media reports in New Delhi said that Prime Minister Modi, during his two-day visit to Brazil, may invite Mr. Bolsonaro to be the chief guest at Republic Day celebrations next year, in a bid to expand India’s outreach to South America.

Enormous potential for growth in ties with India: U.S.

There is an “enormous potential” for growth in the India-U.S. relationship, the Trump administration has said, exuding confidence that the ongoing trade negotiations could be worked through because of the friendship between the two nations. “As it relates to our trade relationship, the secretary (of state) has said this as well when we were in […]

Shares of Indian Railway Catering and Tourism Corporation (IRCTC) made a strong debut on the bourses on Monday, surging to over ₹600 apiece — a significant premium over its issue price of ₹320. On BSE, IRCTC shares were trading at ₹644 at 9:45a.m., which was more than double its issue price even as the benchmark […]