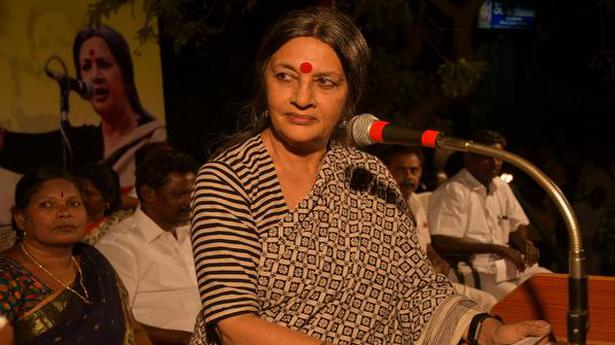 CPI (M) leader and Rajya Sabha member Brinda Karat on Sunday said people should ensure a bigger presence of Left parties in Parliament to effectively act as their voice and take up the issues concerning them.

Ms. Karat, who was in Visakhapatnam to campaign for party’s Jana Sena-supported candidate for Araku Valley Assembly constituency Killo Surendra, told reporters that only the red flag could vouch the cause of working class, farmers, employees and other sections. “We have proved that only we can spearhead people’s struggles over land rights/reforms, disinvestment, contract employment, minimum wages, social security measures and democratic rights,” she commented.

Referring to the BJP-led NDA Government, she said Prime Minister Narendra Modi during past five years had functioned in a highly discriminatory manner trying to assault on the democratic institutions defying the constitution. She said Chief Minister N. Chandrababu Naidu had also aligned with the BJP for four years and later severed the relationship realising his support base was on the wane due to his association with Mr. Modi.

Stating that the people were yearning for change at the Centre as well in the State, she said all secular and democratic parties would form an alternative government after the elections.

Asked to comment whether the Left parties would join the proposed Congress-led front, she said there was no such front and only after the elections an alternative would emerge. She said defeat of the Modi Government was a foregone conclusion.

Ms. Karat blamed both the Telugu Desam Party (TDP) and YSR Congress Party for their failure in taking up genuine right of Andhra Pradesh to get special category status and hoped that Jana Sena-led alliance would form the government in the State after the elections.

She said the Left parties had successfully taken up movements over price rise, unemployment, privatisation and other important issues and if they were given bigger number, their voice could be heard effectively in Parliament and Assemblies. She said the NDA Government was only committed to crony capitalism and safeguarding the interests of Adanis and Ambanis and all those close to the ruling coalition.

Prime Minister Narendra Modi on Saturday condoled the demise of archbishop of Shillong, saying he will be remembered for his passion towards Meghalaya’s progress. Dominic Jala (68), the archbishop of Shillong, Meghalaya died in a car accident in California, US, according to news reports. “Anguished by the passing away of Most Rev Dominic Jala, the […]

Bring back Tamils from abroad: Stalin

DMK president M.K. Stalin on Thursday urged the State government to take steps to bring back Tamils stranded in the Gulf and other countries due to th Source: thehindu.com Related

In a setback to senior Congress leader P. Chidambaram, the Delhi High Court on Tuesday dismissed his anticipatory bail application in the . “Facts of the case prima facie reveal that petitioner [Mr. Chidambaram] is the kingpin, that is, the key conspirator in this case,” Justice Sunil Gaur remarked, noting that custodial interrogation of the […]