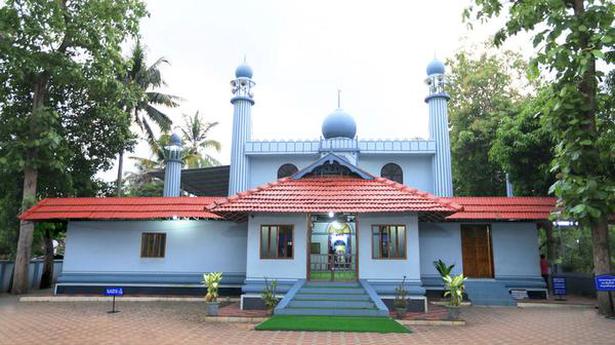 Restoring the original character of an ancient religious monument that has survived more than a millennium is not an easy task.

Muziris Projects Ltd. is attempting the restoration of the unique Cheraman Juma Masjid, in Kodungalloor, in Kerala’s Thrissur district, despite the fact that it has gone through several renovations and reconstructions over centuries.

It is believed to be the first mosque built in India in 629 C.E., the oldest in the Indian subcontinent, and the second oldest in the world. A lot of non-Muslim pilgrims too come for prayers at this mosque.

According to Dr. Mohamed Sayeed, president of the managing committee of the Masjid, the most dominant tradition has it that the last of the Chera kings, Cheraman Perumal, abdicated the throne, embraced Islam, and left for Mecca. The king wrote letters to his relatives in Kerala and as per his wish, Malik-ibn-Dinar and other Arab traders were given permission to build mosques in Kerala. Cheraman Masjid was the first in the series.

E. Ismail, former Head of the Department of History at Sir Syed College, Kannur University, writes that “Kerala can be considered as the earliest Islamic frontier in India.”

He explains that the legend about the construction of Cheraman Juma Masjid in 629 C.E. was that it happened during the last years of the life of Prophet Mohammed. He concludes that these mosques built along the coastal areas were originally meant for the Arab merchants who visited the coast often.

The government of Kerala launched the Muziris Heritage Project to recover the historical and cultural importance of the legendary Muziris port in a sustainable manner.

Muziris Projects Ltd. boasts an excellent list of museums and monuments that express the spirit of a significant era in the history of Kerala, known for its trade and cultural values, and the Cheraman Masjid restoration is its most ambitious initiative. The Chennai-based architect Benny Kuriakose, known for the emphasis he places on construction using various cost-effective techniques, is in charge of this challenging venture.

Mr. Kuriakose points out that to increase the capacity of the mosque, many additions were made over time, which compromised the authentic historical character of the Masjid.

It was reconstructed in the 11th century C.E., and later again 300 years ago. The last renovation was done in 1974 and another extension was made in 1994 to accommodate the ever-increasing number of devotees.

Though the front part of the mosque was demolished, its ancient part was luckily left untouched. Kuriakose finds it remarkable that the members of the Masjid committee have agreed for the restoration on the condition that a newly built basement would provide space for devotees to conduct worship.

He has decided to make it look different from the predominant Persian character of most Indian mosques. So, architectural elements that existed before the Renaissance are going to be introduced here.

The basement will be decorated with tiles and lighting will be used in a different way to create the feeling of a mosque inside, compensating for the lack of height.

A new museum showcasing the history of the mosque will also be set up in a nearby compound. It is a heritage site and the excavation will be supervised by S. Hemachandran, former director of Kerala Archaeology department.

The restoration work will be inaugurated by Kerala Governor Arif Mohammed Khan on Sunday at 4 p.m. Finance Minister T.M. Thomas Isaac will deliver the keynote address.

(Lekshmy Rajeev is an author and translator)

The story so far On March 5, the Rajasthan Drugs Control Organisation (DCO) said it found the chemical formaldehyde in baby shampoo manufactured by personal-care company Johnson & Johnson. The two problem batches containing the chemical have now been withdrawn from the market. J&J has contested the findings, however, and these samples will undergo repeat […]

No inquiry against editors in Assam, MHA clarifies

The Union Ministry of Home Affairs said on Friday that it had not asked the Assam government to conduct any inquiry against some editors in the State who have opposed the Citizenship (Amendment) Bill, 2016, terming the information as “absolutely baseless” and “mischievous”. In a statement, the Ministry said that it had been reported in […]

A Delhi court on Tuesday allowed the Enforcement Directorate to interrogate Christian Michel, the alleged middleman who was arrested in the AgustaWestland chopper scam case, inside the Tihar jail in New Delhi. Special Judge Arvind Kumar allowed the ED’s plea to question Michel inside the prison. The court had on Monday asked Tihar Jail authorities […]