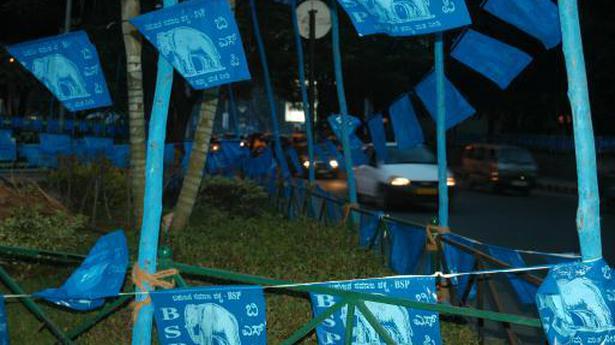 Two leaders of the Bahujan Samaj Party (BSP) were on Tuesday garlanded with shoes and slippers by irate party workers who blackened the faces of the two men before parading them on donkeys, the fallout of the recent defection of all six MLAs elected on a BSP ticket in Rajasthan to the State’s ruling Congress party.

The BSP workers mobbed the party’s national coordinator Ramji Gautam and State in-charge Sita Ram Sila, when the duo reached the party office here, and accused them of selling party tickets and cheating the cadre. The two leaders, who had travelled from Uttar Pradesh, were made to sit on donkeys and paraded on the road in front of the office.

As a video of the incident went viral on social media, BSP supremo Mayawati blamed the Congress for the episode and said that Rajasthan’s ruling party had first caused a split in her party and was now attacking its senior leaders to stop BSP’s progress in the State. “People will give a befitting reply to Congress. It should desist from resorting to such disgusting acts,” she tweeted.

The BSP workers raised slogans against the national coordinator and alleged that the party leaders had sold the Assembly election tickets to “parachute candidates” of Congress and BJP, while ignoring and exploiting the workers who had put in great efforts to strengthen the party for five years.

The BSP had last month dissolved its executive in the State after all its six MLAs merged en bloc with the Congress, a day after a clash among party members at a meeting convened at the party office to discuss the crisis in the party.

On September 17, the six MLAs, who had earlier extended outside support to the Congress government, joined the ruling party taking its tally in the State Assembly to 106. The merger was perceived as a politically astute move of Chief Minister Ashok Gehlot, who has improved the prospects of the Congress for the upcoming urban local body and panchayat elections.

Pradesh Congress Committee vice-president Archana Sharma said that Tuesday’s incident had brought the BSP’s internal differences to the fore. “Congress had no role in this episode,” Ms. Sharma told journalists at the party’s State headquarters. “If the BSP leaders lodge a complaint in this connection, the police will take action,” she added.

The loss of crops due to floods in the State has been put at ₹125 crore, according to preliminary assessment by the government. Even as the exact extent of the damage will be known only after flood waters have fully receded, senior officials said around 27,468 hectare of agriculture land has been completely destroyed. This […]