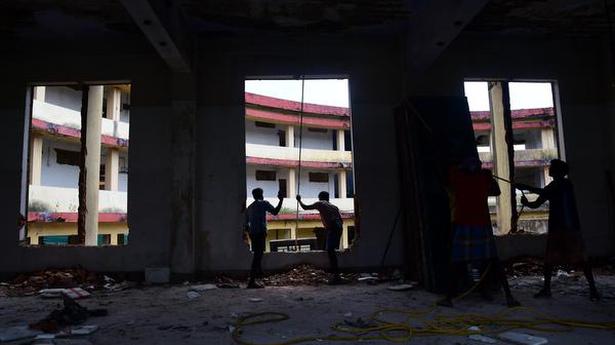 The demolition work of the old municipal bus-stand in the town has come to a standstill following a dispute between the contractor and headload workers.

The dispute erupted on Monday morning over the workers’ demanding wages that the contractor did not agree to.

Workers of the AITUC and the INTUC demanded that ₹500 be paid for loading a tonne of windows, doors, and other wooden items recovered from the old building.

However, the Chennai-based contractor insisted that ₹350 would be paid for loading a tonne of materials recovered from the building, leading to stoppage of demolition work.

Municipal officials intervened when the standoff brought the work to a standstill. Discussions initiated by the officials succeeded in convincing the contractor to pay ₹480 for loading a tonne.

The impasse is likely to ease on Wednesday when the headload workers shift the wooden doors and windows salvaged from the building.

The contractor said heavy-duty bulldozers with modern facilities would be used to raze the building down without causing much noise.

The bus-stand building near Palakkad Town Railway Station built in 1974 had fallen into disuse when its strength weakened. Long-distance buses plying to Kozhikode via Mannarkkad had refused to enter the stand and traders’ business started dwindling as passengers preferred to stay away from the place.

Traders and municipal councillors had staged a series of protests against the bus operators refusal to enter the 45-year-old stand.

District Collector D. Balamurali, however, said buses could not be asked to enter the premises without reconstructing the facility.

The pandemic caused by Coronavirus may have brought the world to its knees, but that has not deterred a couple in Chhattisgarh to name their newborn twins as ‘Corona’ and ‘Covid’. The two words may evoke fear and devastation in minds of others, but for the Raipur-based couple they symbolise triumph over hardships as the […]

Former Army chief General V.P. Malik on Friday stated that policymakers had not learnt due lessons from the Kargil War, leaving the nation vulnerable on the security front. He was speaking at the Military Literature Festival, where he expressed disappointment over “the lackadaisical attitude of political class” towards the defence needs of the country. “We […]

The Kendriya Vidyalaya Parents Association, Ernakulam region, has opposed the move to collect fee for the first quarter (April 2020 to June 2020) of t Source: thehindu.com Related