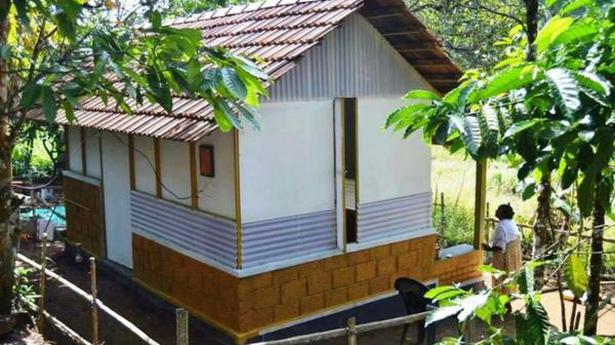 Construction of houses was a major challenge that the district administration faced after the floods in August last year.

It was then that a Capuchin priest came out with a concept of low-cost cabin houses. The houses had not only served the flood-affected but also the homeless in the other districts too.

Father Jijo Kurian and his team had already handed over 15 cabin houses in various parts of the district. The houses have been constructed using traditional materials such as used roof tiles.

“The houses have been constructed with the sponsorship of Facebook friends and various groups and members,” he said.

Father Kurian said the houses mainly benefited economically weak small families. The houses had been constructed using old roof tiles – used in typical Kerala style houses of yesteryear and each house was unique and looked different from the other.

He said the cost of a single bedroom house with kitchen, toilet, sit-out, and bathroom was just ₹1.5 lakh.

“The duration of construction is 10 to 15 days. Though a one-bedroom house is the minimum requirement, two-bedroom houses have been built depending on the needs of the family.

A two bed-room house can be constructed at ₹2 lakh.”

The minimum use of cement bricks and iron was the feature of the cabin houses.

“However, they are strong and look congenial for the green ambience of the rural segment,” he said.

Elavumkalparambil Ajimol, who stays at a cabin house with her two children, said the house had enough space for the family to live comfortably.

“We plan to construct more houses and to keep the privacy of the beneficiaries, we will not conduct house-warming functions. Only the beneficiaries will know who the sponsor is,” Father Kurian said.

He said the focus was to provide houses to the poor who were out of government schemes due to various reasons.

No let up in Maharashtra as positive cases rise to 490

The number of COVID-19 positive cases surged to 490, with 67 new cases being reported across Maharashtra on Friday, and the official death toll rose by six to touch 26 so far. While two deaths were reported from Mumbai, one was reported from Vasai-Virar, one from Badlapur, and one each from Pune and Jalgaon districts. […]

On Tuesday, as Prime Minister Narendra Modi marked his 69th birthday on a visit to Gujarat, his Cabinet colleagues shared their birthday greetings for him at events held by their Ministries on various issues. Culture Minister Prahlad Singh Patel inaugurated an exhibition of photos of monuments and archaeological sites in Kashmir, mostly in Pakistan-occupied Kashmir, […]

A 26-year-old man undergoing rehabilitation from drug addiction fell to his death from a Meghalaya hospital that was sealed on Monday night after a doctor there tested positive for COVID-19. Police in Meghalaya capital Shillong said the man died on the spot after falling from a considerable height from the window of Bethany Hospital early […]