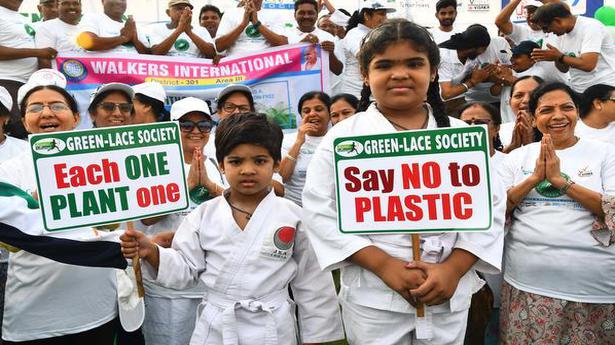 Minister for Environment, Forests, Science & Technology Indrakaran Reddy said on Wednesday that the State Government could ensure planting 113 crore saplings out of a target of 230 crore, across Telangana, as part of the Haritha Haaram programme.

This year, during the fifth phase of the programme, the Government aimed to plant a total of 83 crore saplings, he said, during an event in Adilabad on the occasion of World Environment Day. He planted seedlings and distributed jute bags on Wednesday.

Telangana State Pollution Control Board marked the day by taking out a ‘Green Rally’ with participation from students. The rally was flagged off by the Board’s chairman Rajiv Sharma, who stressed on the need to curb air pollution in the city.

Cash prizes and certificates were distributed to winners of essay writing, quiz and painting competitions organised for school students.

Besides, Singareni Collieries organised a meeting, where General Manager-cum-Coordinator Antony Raja spoke about the necessity of reducing usage of pollution-causing vehicles and adopting eco-friendly methods like car pooling. A pledge was also administered for employees on this occasion.

The Madras High Court on Thursday ordered maintenance of complete transparency on State government’s decision to give one-time special financial assistance of ₹2,000 each to around 60 lakh poor families in the State. The government argued that the assistance was aimed at helping those affected due to Cyclone Gaja that caused havoc in 12 districts […]

Poets at the 85th Akhila Bharata Kannada Sahitya Sammelana expressed the current zeitgeist of India, in Kalaburagi on Friday. They expressed their angst against the Citizenship Amendment Act (CAA) and the National Register of Citizens (NRC), the ills of globalisation, and the discriminatory caste system. Writer and activist Vithappa Gorantli stated at the beginning that […]