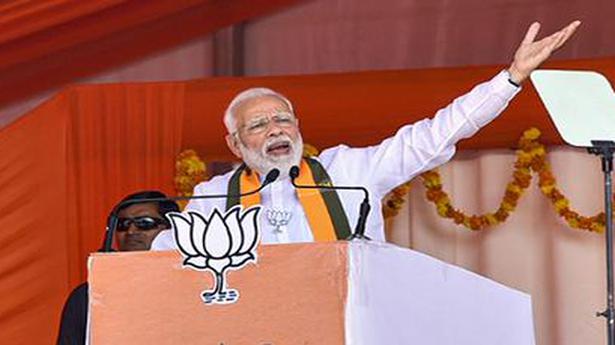 Campaigning ended on Saturday for the October 21 Assembly elections in Haryana and Maharashtra, as well as the byelections to 51 Assembly seats and two Lok Sabha constituencies spread across 18 States. Counting of votes will be on October 24.

Campaigning for the Haryana election ended with Prime Minister Narendra Modi addressing two rallies in Rewari and Ellenabad. He attacked the Congress over Article 370 and the Kartarpur Corridor, accusing it of “destroying the country” with wrong policies and strategies.

At a rally in Rewari, Mr. Modi accused the Congress of failing to abrogate Article 370 despite having promised to do so in Parliament in 1964.

While the ruling BJP made the scrapping of the special status of Jammu and Kashmir a major poll plank, the opposition slammed the government over issues of unemployment and farmers’ distress during electioneering.

The main contest is seen between the BJP, the Congress and the Jannayak Janata Party. The BSP, the AAP, the INLD-SAD combine, Swaraj India and the Loktantra Suraksha Party have also thrown their hats into the ring, though none of them is contesting in all 90 seats.

The campaign in Maharashtra was again dominated by the aggressive narrative on Article 370 by the BJP for a second straight term under Chief Minister Devendra Fadnavis. From the Opposition’s perspective, it was lacklustre canvassing, except a few rallies addressed by Mr. Gandhi and NCP leader Sharad Pawar.

The main contest for the 288 seats is a face-off between the “Mahayuti” of the BJP, Shiv Sena and allies, and “maha-aghadi” (front) led by the Congress and the NCP. A total of 3,237 candidates are in the fray, including 235 women.

The BJP is contesting 164 seats, which include candidates of smaller allies contesting on its lotus symbol, while Sena has fielded candidates on 124 seats. The Congress has put up 147 candidates and the ally NCP 121.

Among other parties, the Maharashtra Navnirman Sena (MNS), led by Raj Thackeray, has fielded 101 candidates, the CPI 16, the CPM 8. The BSP has fielded candidates in 262 constituencies. A total of 1,400 Independents are also in the fray.

Counting of votes will be on October 24.

The BJP and its allies are hoping that the winning momentum of the Lok Sabha polls will continue in the 51 Assembly byelections across 18 States. The BJP holds 30 of these seats while the Congress had won 12.

The return of Mayawati to campaigning after the Election Commission of India’s censure with a rally alongside Samajwadi Party patriarch Mulayam Singh Yadav in Mainpuri on Friday, is one more example of how the Bahujan Samaj Party chief’s strident approach has given way to a more inclusive, layered pitch, keeping in mind the complex caste […]

Minister for Food and Public Distribution Ramvilas Paswan claimed on Wednesday that less than one per cent of the total foodgrains in FCI godowns have gone waste since 2015-16. This comes in the backdrop of widespread criticism that the Narendra Modi government is holding back on distributing foodgrains, even as hunger rises on the streets […]

Late at night on October 4 trees began to be cut at the Aarey Milk Colony despite protests. The Bombay High Court had on October 3 paved the way for the construction of a car shed for Mumbai Metro 3 there. It upheld the Brihanmumbai Municipal Corporation Tree Authority’s approval to cut 2,646 trees at the Aarey […]