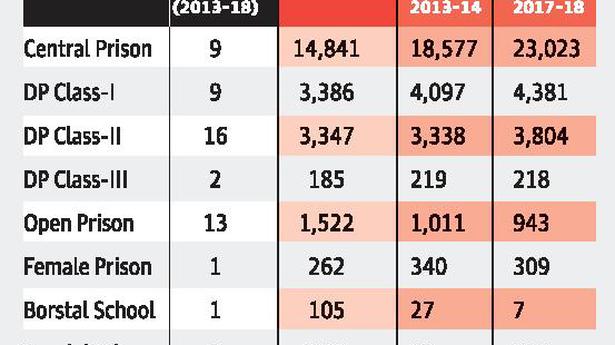 “Similarly, in case of District Prison and Correctional Centres Class-II, no new prisons were constructed nor any efforts were made by the department to accommodate the excess inmates which ranged between 100 to 113% of capacity,” the report said.

The report has revealed that female prisons too have seen an increase of 18% in 2017-18. In case of District Prison and Correctional Centres Class-III the occupancy ranged between 75% and 118% during the above period. The report also observed that of the 102 sub-jails in tehsils across the State with a capacity to accommodate 1,670 prisoners, only 54 sub-jails were functioning.

Considering the growing demand for National Eligibility-cum-Entrance Test (NEET) coaching in and around Bidar, Gnyana Sudha Vidyalay, a well-known educational institution in the city, launched its Gnyana Sudha NEET Academy on Monday. After inaugurating the facility at Jyanaranga auditorium on campus, Dhanraj Talampally, Managing Director of Talampally Group, commended Gnyana Sudha Vidyalay for establishing the […]

Sara Abdullah Pilot’s petition challenging the booking of her brother and former Jammu and Kashmir Chief Minister Omar Abdullah under the Public Safety Act (PSA) is listed before a Bench of Justices Arun Mishra and Indira Banerjee on February 14. This follows the recusal of Justice Mohan M. Shantanagoudar from the case on Wednesday. A […]