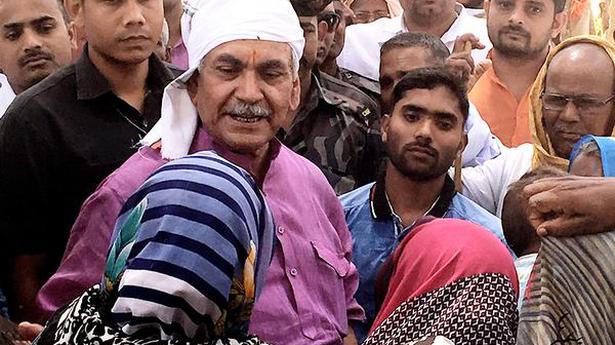 On a blistering April afternoon in Tiara village in Ghazipur constituency, Union Minister for Telecom Manoj Sinha is laying down his campaign pitch to an attentive audience. He lists the many development projects, as well as social welfare schemes initiated by the Modi government before going on to the marquee topic of the Balakot air strikes.

It’s not a very tough crowd, with a sizeable presence of women , who surround Mr. Sinha after the meeting with questions on how to use their Ayushman Bharat (health insurance) cards.

It is clear that Mr. Sinha hopes to transcend the caste equations in the area via these welfare programmes.

“Ghazipur’s reference points have changed under the Modi government. Earlier it was referred to as just another place close to Varanasi. Now it is the point of reference to places nearby,” Mr Sinha tells the crowd.

The claps grow louder when he thunders about the air strikes. “Modi sarkar ne aantankwadiyon ko ghar main ghus kar maara (the Modi government entered the homes of terrorists to hit them). Yeh biradari ka chunav nahin, desh ka chunav hai (this is not an election for your community but for who will rule the country),” he says.

The cheers when he mentions the first instalment of the Pradhan Mantri Kisan Samman Nidhi (PM-KISAN) or an income support scheme for farmers are less muted than when he talks of bridges and roads, but the big roar is reserved for his attack on his opponent, the mahagathbandhan candidate Afzal Ansari. “Tiara must choose whether it wants a government that took steps to realise the Ghazipur-Ganga rail bridge (promised by late prime minister Nehru in the 1950s) , or the politics of murders,” he said referring to Mr Ansari’s police record.

Ghazipur had been over run by drug cartels in the 1980s and 1990s , obscuring the literary allusions to it by one of its most famous sons, writer Rahi Masoom Raza, who had captured the area in his famous novel, Aadha Gaon (Half a Village). The unsavoury reputation of the area appeared sealed after the murder of Mohammadabad MLA Krishnanand Rai. Mr Ansari’s brother Mukhtar Ansari was charged in the case.

The caste arithmetic of Ghazipur is not entirely favourable for Mr Sinha, given the Samajwadi Party (SP)-BSP alliance in the State. Yadavs and Muslims account for around 4.5 to 5 lakh in this seat of 18 lakh voters; Dalits are an additional 3 lakh (all figures except those for Muslims and Dalits are approximations). Of the five Assembly seats, two are firmly with the SP, and two others are reserved.

In this scenario, Mr Sinha is not only banking on upper caste votes of around 4.25 lakhs including Brahmins, Rajputs, Bhumihars, Vaishias, but also the 2.5 lakh non-Yadav OBCs that had voted for the BJP in 2017 and 2014.

Lalji Prasad, a Chauhan (non-Yadav OBC) from Dullahapur in the area reflects some of that hope of the BJP. “My house is among the Yadav community here, and they are all voting for the other (mahgathbandhan) side,” he says, not revealing where he will vote, but othering the Mahgathbandhan, and signalling his preference.

The fact that SP leader Akhilesh Yadav hasn’t committed to any poll meetings for Mr Ansari — his opposition to the latter’s entry into the SPalong with his brother Mukhtar Ansari, had led to the break with his uncle Shivpal in 2017 — is also being factored in.

Mr Ansari, however, is no pushover and told The Hindu that Mr Sinha’s mention of his police record will not help him. “I defeated this same vikas purush Manoj Sinha in 2004,” he recalls.

With polls due on May 19th, and Prime Minister Modi yet to campaign here, there is still a while to go before this contest is sealed.

Eight die in Tamil Nadu; 3 in Telangana and A.P.

Congress president Rahul Gandhi on Monday said Prime Minister Narendra Modi is a “boxer” who entered the ring to fight unemployment but ended up punching his “coach” and veteran BJP leader L.K. Advani. Mr. Gandhi used the boxer analogy at a poll rally in Bhiwani, which is known as India’s boxing nursery and has produced […]

Congress president Rahul Gandhi on May 8 said neither he nor his party coined the chowkidar chor hai slogan, and attributed the jibe to the youth and farmers. Addressing a poll rally in Bhind, Mr. Gandhi attacked Prime Minister Narendra Modi over the Rafale deal, claiming the latter ensured that a “thief”, industrialist Anil Ambani, […]