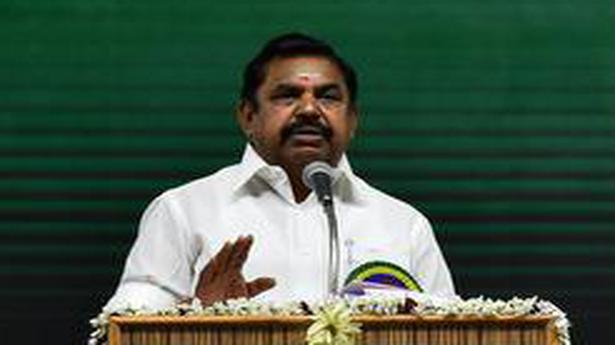 Chief Minister Edappadi K. Palaniswami on Sunday announced that the Cauvery delta region would be declared a Protected Special Agriculture Zone as a step towards ensuring food security of the State.

The announcement was widely hailed by political parties and farmers’ organisations, while the DMK termed it a “diversionary tactic”.

At an official function at Thalaivasal in his native Salem district, Mr. Palaniswami said the State government would never give its approval for projects such as hydrocarbon exploration in the delta region.

“The Cauvery delta region is an important agriculture region in Tamil Nadu and farmers continue to do agriculture, despite climate challenges. It is just and reasonable that projects like hydrocarbon exploration have raised concerns among farmers and other agriculture-based labourers. Since the delta region is close to the sea, there is a need to safeguard the region. To ensure that agriculture is not affected, the Cauvery delta regions in Thanjavur, Tiruvarur, Nagapattinam, Pudukottai, Cuddalore, Ariyalur, Karur and Tiruchirapalli will be converted into a Protected Special Agriculture Zone,” he announced.

Mr. Palaniswami said the State government would hold consultations with legal experts, and steps would be taken to enact special legislation.

He alleged that DMK leader T.R. Baalu, who had served as the Union Minister of State for Petroleum in 1996, when methane gas was found in the Rajasthan desert, chose to get the project implemented in Tamil Nadu in 2010.

The DMK government in January 2011 signed a memorandum of understanding with the Great Eastern Energy Corporation to dig borewells and conduct explorations for four years in the region, he charged.

The MoU was signed when DMK president M.K. Stalin was the Deputy Chief Minister. But now the DMK was conducting protests in the region and spreading lies among the public, he said.

Golden car to be repaired, tested before use: official

While it is common to see parents naming their children after freedom fighters and celebrities, a couple from Mylavaram has named their newborn boy after industrialist Ratan Tata. Maricharla Pushpalata and Radha Krishna became parents of a baby boy at Mylavaram hospital on February 17. Inspired by Mr. Tata’s success and his philanthropic activities in […]