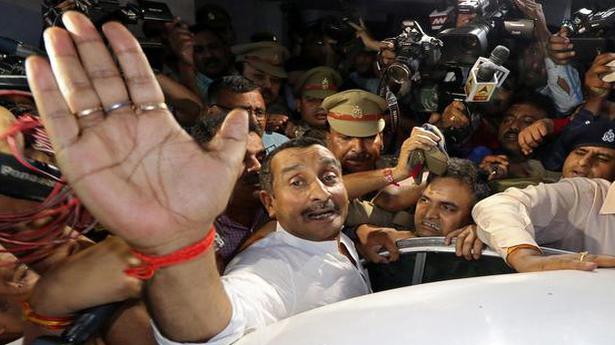 The Central Bureau of Investigation on October 11 filed a charge sheet in the Unnao rape victim’s “accident” case, pursuant to the Supreme Court’s directive. Expelled BJP MLA Kuldeep Singh Sengar, his associates and the driver of a truck which had collided with a car, seriously injuring Unnao rape victim and her lawyer have been named in the charge sheet.

Two of the girl’s aunts died and she and her lawyer suffered serious injuries after the truck collided with their car at Rae Bareli in Uttar Pradesh on July 28. The girl was first admitted to a Lucknow hospital, from where she was shifted to the trauma centre of the All-India Institute of Medical Sciences.

While the victim was recently discharged from the hospital, the lawyer is still not in a condition to record his statement.

On September 25, the Supreme Court gave the CBI two more weeks to complete the probe. After the case was transferred to the CBI on a reference from the State government, the agency had sent a team comprising forensic experts to examine the scene of the alleged crime. Statements of the victim and some witnesses were also recorded.

On the special court’s direction, arrangements are being made for the stay of the victim and her family members in Delhi in view of the threat perception. The CBI has filed charge sheets in connection with the related cases, which include the alleged murder of her father in judicial custody in 2018.

One injured in clash over egg supply tender in Kurnool

Tension gripped the Collectorate on Wednesday following a clash between two groups vying for the egg supply tender outside the district education office. One person was injured and he received treatment at the Government General Hospital with police guarding him. Wednesday was the last day for the tendering process for supplying eggs to all government […]

Now, a mobile app to find a toilet

Searching for a toilet need not be a worrisome experience in God’s Own Country any more. All that one has to do is to search it online on the website of Kerala Tourism or downloaded a mobile app and the details of toilets near your location will be available. Not just the location, the picture […]