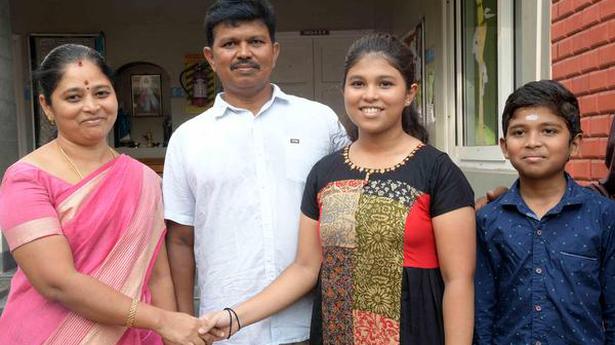 B. Kaviya Varshini from Vidhya Niketan Public School in Coimbatore scored 497/500 and secured the national-level third rank in the Class 10 Central Board of Secondary Education (CBSE) examinations results announced on Monday.

On avoiding stress before the examinations, she said she would revise whatever was taught in school on the same day.

Speaking to The Hindu on May 6 shortly after the results were announced, the topper said that she used to take breaks in-between her studying schedule to relax and play guitar. “I play the guitar whenever I get stressed,” she said.

Ms. Kaviya scored centums in Mathematics, Science and Social Science, 99 in Tamil and 98 in English.

Her parents, P. Babu and N. Vimalarani, said that they were elated.

School Principal Brinda Padmanabhan said the result was possible because of the mentoring by the school Correspondent Rajini Krishnamurthy. N. Rajkumari, Ms. Kavitha’s class teacher, said that she was “very focused” and was someone who took even the small tests seriously.

Being the only person in the school to secure a centum in Social Science, Ms. Kaviya said she managed to attend all the questions. “I knew that CBSE would give marks if it was out-of-syllabus and only when we attempt the question,” she said.

She is the only student from Tamil Nadu featuring in the list of 97 toppers released by the CBSE on May 6.

Mahasivaratri to be celebrated on Feb. 21

Mahasivaratri will be celebrated at Sri Arunachaleswarar temple in Tiruvannamalai on February 21. At 5.00 a.m. on Friday, latcharchana will be performed in the sanctum sanctorum of Lord Arunachaleswarar. About 1 lakh lamps will be lit across the interior corridors of the temple. Devotees will be allowed to have darshan of the occasion. Kala poojas […]