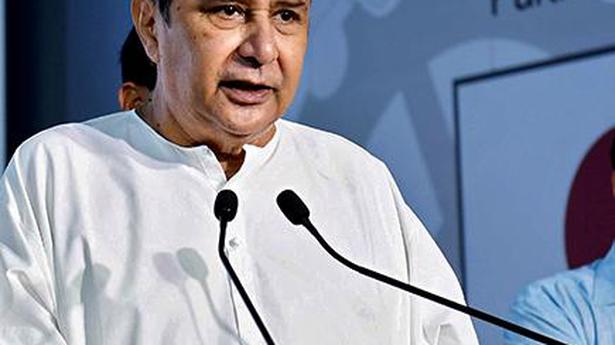 At all public meetings, he alleged that the Centre was conspiring to stop the Krushak Assistance for Livelihood and Income Augmentation (KALIA) scheme of the State government that has already benefited 40 lakh peasants. The Chief Minister promised that on the first day of his next government, two instalments of the scheme worth ₹10,000 will be disbursed to farmers who have not benefited so far.

Mr. Patnaik criticised the Central government for failing to keep its promise of doubling the minimum support price of paddy. He asked why the Centre had stopped financing the State’s KBK Yojana and scholarship funds for Scheduled Caste and Scheduled Tribe students.

At meetings in Kandhamal district, he lamented that even after the State government had provided land and support, railway tracks have not reached the area.

Addressing public meetings at Khallikote and Kavisuryanagar under the Aska parliamentary constituency, BJP leader and Union Minister Dharmendra Pradhan hit out at Mr. Patnaik for saying the BJD will play a crucial role in government formation at the Centre if there was a fractured mandate.

The Tobacco Board has suspended auction of tobacco across all its 10 platforms in the State in the wake of the lockdown declared by the State government to combat the COVIDd-19 outbreak. The suspension comes at the fag end of the auction season when barely two million kgs of tobacco is remaining to be auctioned. […]

The Tripura government has designated several courts as first-track courts to try pending proceedings under the Protection of Children from Sexual Offences (POCSO) Act. A special court has been set up here and nine more across districts have been designated for the purpose, a law department official said. Five such courts have been set up […]

The sessions court in Alwar, which acquitted six persons accused of beating Haryana dairy farmer Pehlu Khan to death, has pointed out “serious lacunas” in the police investigation which created doubts about the involvement of the accused in the alleged crime, making the prosecution’s theory unreliable. The court gave the benefit of the doubt to […]