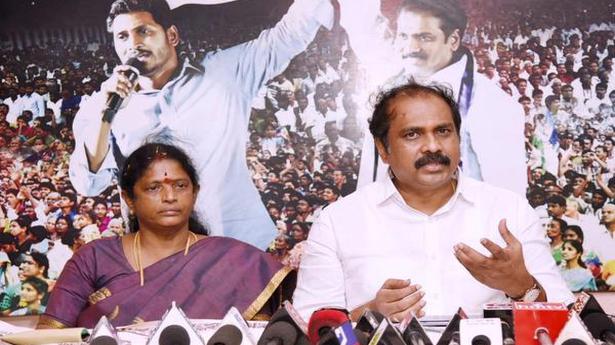 Agriculture Minister Kurasala Kannababu has said the State government appealed to the Centre to permit procurement of discoloured paddy and paddy with fair average quality as the rains in October led to damage of the standing paddy crop across the State.

Speaking to the media here on Sunday, Mr. Kannababu said the State government already wrote to the Central government appealing it to allow procurement of discoloured paddy. The same request has also been made to the six-member Inter Ministerial Central Team (IMCT) that visited the State last week to assess the damage of crops and infrastructure facilities due to recent floods.

“The Central team, after taking stock of the situation, assured the State of timely aid from the Central government,” said Mr. Kannababu.

“The procurement process began in the State. The government’s plan of action to procure discoloured paddy will soon be announced. All the Rythu Bharosa Kendras have been converted into procurement centres,” said the Minister.

The State government would release input subsidy of ₹133 crore on November 17, compensating the damage of crops due to recent rains. Over 1.7 lakh farmers suffered crop loss, said Mr. Kannababu.

Prime Minister Narendra Modi, who turns 69 on Tuesday, will visit the site of the Gujarat’s Sardar Sarovar Dam on the Narmada river whose water level has reached its highest mark for the first time to celebrate the feat and kick off Namami Narmade festival. For the first time since the height of the dam […]

Former Tirupattur MLA T.K.C. Sundaravelu, 67, his wife Vijayalakshmi, 60, and their car driver Veeramani were killed on the spot when the car in which they were travelling collided with a multi-axle vehicle on Saturday morning. The accident took place near Minnur at 6 a.m. Sundaravelu was on his way to Chennai for medical treatment […]

There is a delay due to the lockdown, says Collector Source: thehindu.com Related