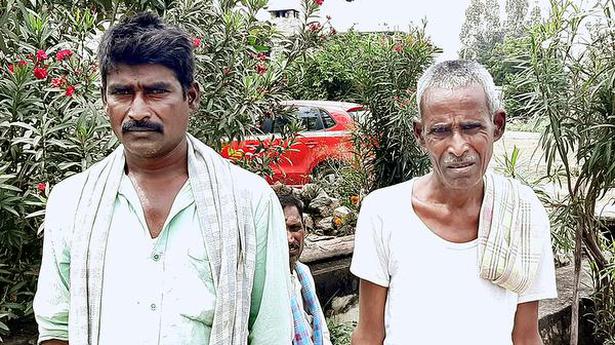 Its a strange situation of the nearly 1,500 residents of Bahilampur village in Mulugu mandal. Though uncertain about when excatly they have to vacate the village, they are certain they have to leave, and are getting mentally prepared for the eventuality.

While some are mulling as to how to lead their new lives as farm labourers – a comedown from the earlier status of small farmers. Some, who were able to buy land in the neighbouring areas are confused about how to commute from the Rehabilitation and Resettlement (R&R) Colony to where they had brought land.

Guvva Ramakrishna, in his 40s, is a small farmer of Bahilampur. Father of a son and three daughters, he got one girl married off. He received ₹ 6 lakh in compensation for his half acre land from the government. Of this, he had retired an old debt of ₹ 1 lakh. To exacerbate, he had to spend about ₹ 3 lakh for his father G. Yadagiri’s medical treatment. Now, Mr. Ramakrishna has two more daughters for marriage and a son to be educated. Recently, he and his wife migrated to Subriyal village in Balkonda mandal of Kamareddy district to work at a big farmer’s farm. They were offered ₹ 1 lakh per annum, or less than ₹ 10,000 per month as wages.

“For reasons beyond my control from being a farmer with my own land, I have beome a farm labourer. Earlier, I used to think about what to sow for my next crop and investment. From now on, my day would start with the search for daily labour. This is our fate,” a rueful Mr. Ramakrishna told The Hindu.

The story of N. Narasimhulu is quite different. He was farmer with five acres and received ₹ 72 lakh in compensation, plus an R&R package for himself and his son. With the monies he purchased 1.5 acres spending ₹ 40 lakh at Singaipally and a little over an acre at Tunkibollaram. He gifted ₹ 1 lakh each to his two daughters.

“We used to stay in the village and cultivate our farms. Now, I have purchased land at Singaipally and my residence will be at Tunkibollaram. Now, I have to travel 8-10 km to reach my farm,” Mr. Narasimhulu said. But that’s nothing compared to the new predicament of the likes of Guvva Ramakrishna.