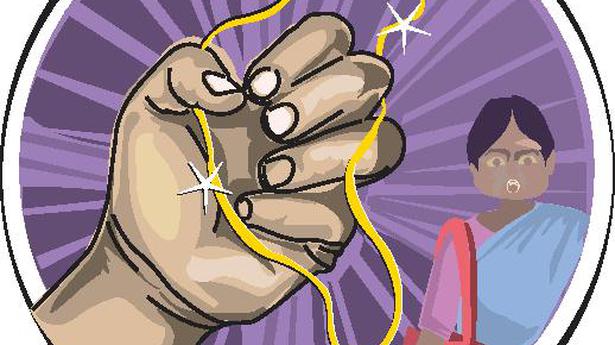 The police have stepped up surveillance and vehicle checks across Mysuru as a part of its investigation into seven chain-snatching incidents that rocked the city on Thursday. However, the culprits continue to remain elusive.

With three police teams engaged into cracking the case, patrolling has been intensified in the mornings and evenings at places that had been identified as susceptible to such crimes and areas women frequent for walk.

The police have identified vulnerable points and escape routes besides reopening previous cases of chain-snatching to get some clues.

Speaking to The Hindu, Police Commissioner K.T. Balakrishna expressed confidence of cracking the cases soon as teams were on the job and making “headway”.

Police personnel have been deployed at check-posts in 77 places across the city. “We are suspecting it to be a professional gang going by the swiftness of the crime. The probe is looking into various angles, including the involvement of some local people and previous offenders,” he said.

To a question, Mr. Balakrishna said the two incidents after dusk on Thursday took place somewhere away from the city which lacked street lights and proper roads. They were not the prone areas of such a crime, he said and suspected some locals behind those two incidents.

The Commissioner said the ‘Operation Fast Track’ launched after the chain-snatching incidents in broad daylight will continue for the next few days. “We have deployed more than 200 civil police personnel. Besides sensitising the women, the teams are patrolling several areas from 6 a.m. to 9 a.m. and 4.30 p.m. to 9.30 p.m. as a security measure. The Garuda teams are making public announcements on the do’s and don’ts for women,” he added.

Mr. Balakrishna, who met the victims and also inspected the scenes of crime along with a team of officers, said the police are leaving no stone unturned to crack the case. “Certain things we cannot disclose but efforts are on,” he added.

Amid strong opposition from green activists, Union Environment Minister Prakash Javadekar on Saturday cited a Bombay High Court order to defend the Mumbai Metro Corporation’s move to fell trees in Aarey Colony, saying it was “not a forest”. “Basically the High Court has decided and ruled yesterday that it is not a forest,” Mr. Javadekar […]

Starting with an open data platform for the 100 cities that are a part of its Smart Cities Mission by 2020, the government is planning to make a wide range of data — from health, education, finances to social aspects — of all 4,041 urban local bodies public by 2024 and eventually monetising it. Union […]