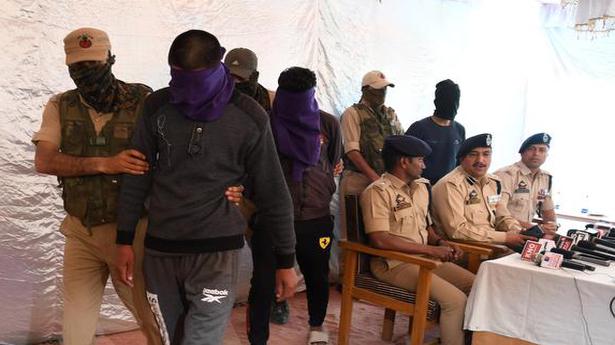 There Jaish-e-Mohammad (JeM) terrorists, involved in Friday’s attack on a police post here, have been arrested, police said in Srinagar on Sunday.

“We have arrested three persons so far in connection with the Chanapora attack case,” senior superintendent of police (SSP) of Srinagar Haseeb Mughal told reporters in Srinagar.

The SSP identified the arrested terrorists as Mushtaq, Junaid and Latief.

Mr. Mughal said the three belonged to JeM and were involved in the attack on the Chanapora police post in which a sentry was injured.

They had also made a failed attempt to snatch his rifle.

“We collected the digital evidence and strengthened the intelligence grid after the attack. We focussed on the suspects already on our radar. We picked them up, questioned them and during questioning, one of them confessed and gave us further details about the group, he said.

Giving details of the attack, the SSP said the three came to Chanapora on a motorcycle, but left it some distance away from the police post.

One of them, named Junaid, went inside the police post with the excuse of tracking the status of passport verification. He checked the place and when he saw that the sentry there had no visible backup, he came out and told his accomplices that perhaps there is no backup for the sentry, so he (sentry) can be targeted.

Then he came back to the post and was accompanied by another person named Mushtaq who was wearing a pheran and a helmet. When Mushtaq was asked to remove the pheran for undergoing search, he took out a pistol and fired on the sentry, the SSP said, adding the sentry was injured and is undergoing treatment at SKIMS Hospital at Soura.

The senior police official said the terrorists also tried to snatch the rifle of the injured sentry but had to leave it because the gun was clamped with a chain to his belt.

In the meantime, the other policemen fired and they fled from the spot, he said.

He said police have recovered a Chinese pistol, two magazines and six live rounds from them.

The motorcycle has also been recovered, he said, adding further investigations in the case were on.

Mr. Mughal said Mushtaq, a postgraduate from Kashmir University, was in touch with a JeM cadre, named Sameer from Pulwama district of south Kashmir, and has been associated with the group for about a year.

“Sameer and Mushtaq were classmates in KU. It was on Sameer’s direction that they tried to loot weapons in Srinagar, he said.

Junaid, the SSP said, was involved in a number of stone-pelting cases, while Lateef is an overground worker (OGW) of the militants and helped them with logistics.

He said the three were arrested from different places in Budgam district in cental Kashmir.

Morning digest: Jammu and Kashmir ceases to be a State; Pentagon releases video, photos of Baghdadi raid, and more

Jammu and Kashmir is all set to get bifurcated into two Union Territories (UTs) on October 31, when Girish Chandra Murmu and Radha Krishna Mathur will be sworn in as Lieutenant Governors of J&K and Ladakh respectively at two separate ceremonies. The Pentagon released video and photos on Wednesday of the U.S. special forces raid that resulted […]

Administrators of several online chat groups in Kerala blocked members from posting messages as the Supreme Court pronounced its judgement in the Babri Masjid-Ramjanmabhoomi land dispute case on Saturday. The restrictions imposed in the morning continued through the better part of the day. The police had warned on Saturday that they would track and prosecute […]

Chitradurga Zilla Panchayat Chief Executive Officer Sathyabama has instructed officers in Hiriyur taluk to take immediate steps to ensure proper supply of drinking water to border areas of the taluk as residents are going through a difficult situation owing to scanty rainfall and depletion of groundwater in all the taluks of the district. Speaking after […]