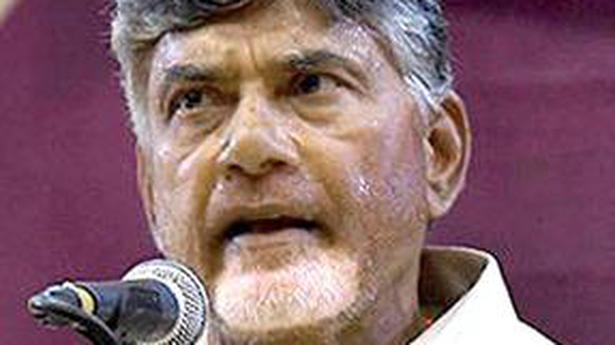 The Andhra Pradesh Legislative Assembly witnessed high drama on Day One of its winter session on Monday as the ruling and Opposition parties locked horns on the government’s claim on compensation to the farm sector due to Cyclone Nivar in Rayalaseema and a few coastal districts.

What pitted them against each other was the denial of an opportunity to former Chief Minister N. Chandrababu Naidu to speak on the matter after Chief Minister Y.S. Jagan Mohan Reddy gave a clarification on the issues raised by TDP MLA Payyavula Keshav.

As Mr. Chandrababu Naidu stood up and insisted that he be allowed to make his point, Deputy Speaker Kona Raghupathi refused, saying it was for TDLP leader Nimmala Rama Naidu to respond to the Chief Minister’s remarks.

Infuriated, Mr. Chandrababu Naidu and 12 other MLAs squatted on the floor.

When repeated pleas to TDP MLAs to return to seats failed, Information and Public Relations and Transport Minister Perni Venkataramaiah moved a motion for suspending the agitating members for the day.

Apparently under prodding from the White House, NASA has said it will continue to cooperate with the ISRO, days after the US space agency’s chief criticised India and termed its anti-satellite weapon test a “terrible thing” for creating about 400 pieces of orbital debris. In a letter to ISRO Chairman K Sivan, NASA Administrator James […]