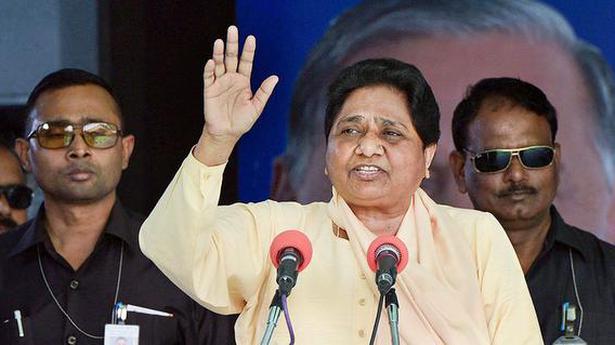 The return of Mayawati to campaigning after the Election Commission of India’s censure with a rally alongside Samajwadi Party patriarch Mulayam Singh Yadav in Mainpuri on Friday, is one more example of how the Bahujan Samaj Party chief’s strident approach has given way to a more inclusive, layered pitch, keeping in mind the complex caste and religious realities of the region.

Combating the BJP’s poaching of her traditional vote bank and adjusting to the demands of alliance partners, Ms. Mayawati, in her speeches, has come a long way from the days of tilak, taraju aur talwar, inko maro joote chaar, where she attacked the symbols of high castes in a crude language.

Words like ‘Manuwadi’, which were once a staple in her speeches, are disappearing. And she does not hesitate in invoking the names of Chaudhary Charan Singh and Ram Manohar Lohia with B.R. Ambedkar and Kanshi Ram.

Ms. Mayawati’s attempt at social engineering is not exactly new. But in the past, it was largely limited to giving a toehold to Brahmins and Thakurs in the party in return for ‘resources’. On stage, they had to sit behind her, barefoot.

The compulsions of the alliance have ensured that Ms. Mayawati has to give equal space to Jat leaders. At the Meerut rally recently, one throne-like seat on stage had to be replaced by two when Rashtriya Lok Dal workers sulked and demanded equal status for party vice-president Jayant Chaudhary in the farmers’ belt. In return, her alliance partners had to acknowledge the presence of her nephew Akash Anand, who has emerged as a force in the BSP during these elections.

“It is a very unlikely alliance. One of the groups that oppresses the Dalits the most is the OBCs, even more than the higher castes. To make the alliance politically viable, she obviously has to undermine her Dalit card,” says Ajai Gudavarthy, assistant professor at the Centre of Political Studies, Jawaharlal Nehru University.

Be it an attempt to appropriate Bajrangbali or talking of keeping upvas (fast) on voting day, she seems to be apprehensive that like in 2014, a section of her so-called core vote bank may continue to vote as Hindus.

The Jatavs are behind her but the Valmikis and lower OBCs seem iffy for they feel the fruits of BSP rule in Uttar Pradesh did not reach them.

In Agra, the Valmikis remind about how she never fielded any candidate from their community from the reserved constituency. Perhaps, that is why her acolytes have to tell the crowd: “Kya Behenji Hindu nahin hain?” (Is Mayawati not a Hindu?)

“Unlike Maharashtra, there was no actual conversion of Dalits and OBCs in north India. The moment anti-Muslim rhetoric goes up, a section of Dalits and OBCs start identifying themselves as Hindus. There is a certain appeal of the RSS and the BJP when they identify themselves as Hindus. They feel more included when the gaze shifts to the Muslims. Suddenly they feel empowered that there is somebody more vulnerable than them,” reasons Dr. Gudavarthy.

It is important for the BSP to neutralise this advantage and it is doing it by whipping up Ms. Mayawati’s Hindu identity.

“As the BJP doesn’t give seats to Muslims, there are extra seats available to accommodate the OBC candidates. This was on display during the Assembly elections in 2017 when Mayawati offered 100 seats to Muslims. That advantage has to be neutralised which I think is a good strategy for the time being,” adds Dr. Gudavarthy.

She is playing the Muslim card with caution. In Deoband, she addressed Muslims because the Congress has fielded a strong candidate in Imran Masood against BSP’s Fazalur Rehman.

The social chemistry at the top is yet to percolate to the ground. In Deoband, the high-caste Muslims didn’t seem to be in favour of Ms. Mayawati being projected as a prime ministerial candidate by the alliance partners. In Aligarh, where the BSP candidate, Ajit Baliyan, a Jat, is in the fray, the local SP leader could be seen vacating the seat for the BSP worker at the party office as it is “their” seat. But in Iglas, which is part of the Hathras reserved constituency, Jats say they will vote for the BJP candidate because he adheres to the social hierarchy.

“This alliance has been possible because of Yogi Adityanath, a casteist leader who has brought back the old varna system. It doesn’t mean there is a permanent social arrangement between the OBCs and Dalits. One of the concerns for the Mahagathbandan is the transfer of votes. To ensure that social prejudices are not triggered, the political rhetoric has to be carefully crafted,” says Dr. Gudavarthy.

The High Court of Karnataka on Thursday directed the State government to compute ad hoc compensation payable in cases of 65 unnatural deaths that occurred in the State’s prisons from January 2012 till May 31, 2019. The court said that the State authorities should adopt the method followed under Section 163-A of the Motor Vehicles […]

A triangular contest is on the cards among the ruling Congress, Opposition BJP and the Rashtriya Loktantrik Party in two Jat-dominated Assembly seats of Mandawa and Khivsar in Rajasthan where bypolls will be held on October 21. Twelve candidates — 9 in Mandawa and 3 in Khivsar, are in the fray. The bypolls were necessitated […]