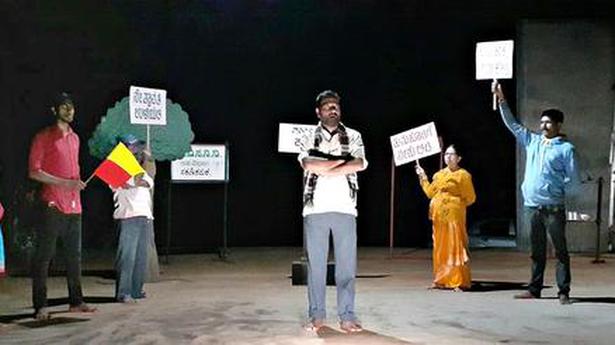 A theatre troupe with a history of over 40 years has come out with a play to depict the Malnad region that has undergone significant changes over the years, owing to multiple factors — man-animal conflict, irrigation projects, infrastructure development, and heavy rain-causing floods. The play has been titled Aane Dariyalli Allola Kallola (Destruction, Devastation along Elephant Corridor).

More than 60 people have died in elephant attacks in Alur and Sakleshpur taluks of Hassan district in the last 10 years. Hundreds have been injured injuries and agriculture crops worth over crores of rupees have been damaged by the pachyderms.

It all began with the construction of Hemavati dam in the 1970s. This was followed by power projects, railway line and most recently the Yettinahole Irrigation Project, meant to carry water from the Western Ghats to dry areas of Chickballapur, Kolar and neighbouring districts.

Members of Jai Karnataka Sangha, the theatre group at Bellekere in Sakleshpur taluk, witnessed all these developments and have often been victims of them. A local shop forms the central metaphor of the 90-minute play that reflects changes in the lifestyle. For instance, over time, fruits in the shop have been replaced by water bottles and carbonated beverages. An English nameboard replaces the Kannada one. And, in the end, the shop collapses following a flood caused by heavy rains, reminding the audience the havoc caused in August 2019.

Prasad Rakshidi, author and director of the play, says that about eight years ago, Rangayana in Mysuru had requested him to direct a street play on the man-animal conflict for its annual theatre festival Bahuroopi. The idea was mooted by the government-run repertory in the backdrop of an elephant attack in Mysuru city, in which one person was killed. “After an elephant entered the city, people began to understand the gravity of the problem faced by those in the Malnad area. We did a street play for the festival and that was the first draft of the screenplay adopted for this play,” he said.

The troupe that began its activities with illiterate agriculture labourers as actors from villages nearby, has produced more than 35 plays so far. They have an open-air theatre, where many well-established repertories stage plays.

Rangasiri, another theatre group in Hassan, will host the play on the CSI School premises in Hassan on Saturday.

Engineering talent remains robust, not a cause for concern, says Cognizant India head

Ramkumar Ramamoorthy, Chairman and Managing Director, Cognizant India, said the quantity and quality of engineering talent is going up significantly every passing year, and there is no real cause of concern about the recent fall in admissions. “I agree that some institutions that do not have enough infrastructure such as faculty, minimum student intake and […]