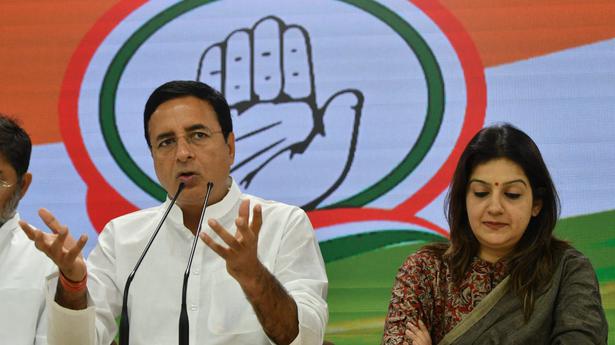 Congress chief spokesperson Randeep Surjewala on Friday said the resignation of Priyanka Chaturvedi, who was the party’s national spokesperson and convenor of its media cell, was a reflection on his leadership.

Ms. Chaturvedi was miffed at the reinstatement of some party workers, who had misbehaved with her, and she resigned from the party and joined the Shiv Sena on Friday.

Addressing a press conference here, Mr. Surjewala said, “Every time a party member leaves, it’s a matter of pain for us. People look for career progression. We wish all of them well, including Priyanka Chaturvedi. I must frankly and on record concede, yes, it’s a reflection on my leadership.”

After quitting all posts in the party, Ms. Chaturvedi had sent her resignation to Congress president Rahul Gandhi and other senior leaders.

“In the last few weeks certain things have convinced me that my services are not valued in the organisation and that I have reached the end of the road. At the same time I also feel that more time that I spend in the organisation will be at the cost of my own self respect and dignity,” Ms. Chaturvedi said in her resignation letter.

Ms. Chaturvedi had lashed out at the party in public on Thursday and accused it of giving preference to “lumpen goons” over those who had given their “sweat and blood” to the Congress.

In further relief to Kerala, a student treated for the COVID-19 was discharged on Sunday after two consecutive test results came back negative, thus becoming India’s second patient to recover from the infection, health authorities said. The patient from Kasaragod, one of the three positive cases of the virus detected in the country on their […]

Kerala Governor P. Sathasivam on Tuesday ordered the Vice-Chancellor, Kerala University (KU), to urgently file a report on the seizure of answer sheets from the house of a Students’ Federation of India (SFI) leader on Sunday. The Cantonment Police had stumbled upon the answer sheets, purportedly validated by the KU, when they searched the house […]

BJP distances itself from Pragya Thakur’s comment on Hemant Karkare

The BJP on Friday distanced itself from Pragya Singh Thakur’s controversial comment that IPS officer Hemant Karkare died in the 26/11 Mumbai terror attacks as she had cursed him. The party said it was her personal view which she might have made “due to years of physical and mental torture”. “The BJP believes that Karkare […]