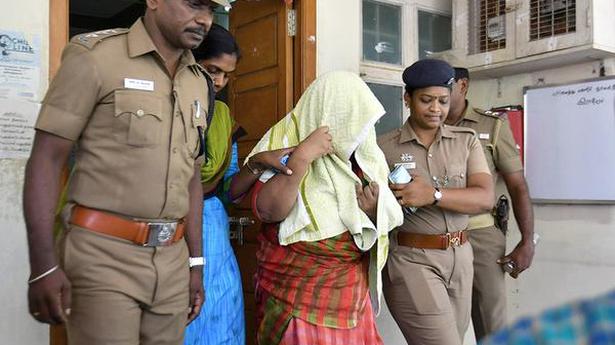 An ambulance driver attached to the Primary Health Centre at Sengarai Pavarkadu in Kolli Hills, who served as a middleman in buying a child from parents, was arrested here on Friday.

After a recorded conversation between a retired nursing assistant R.Amuthavalli, 50, of Valliyammal Nagar in Rasipuram block, with an unidentified man posing as a buyer went viral on social media, Deputy Director of Health Services K. Ramesh Kumar lodged a complaint with the All Women Police Station at Rasipuram demanding action against persons involved in the child sale racket.

The police picked up Amuthavalli, who served in hospitals at Salem, Pallipalayam, Tiruchengodu and Velur, before joining the Government Hospital at Rasipuram. However, she took voluntary retirement from service in 2012. Her husband S. Ravichandran, 54, working as office assistant at the cooperative bank at Rasipuram, was also picked up.

Inquiries revealed that driver Murugesan, 48, used to inform her about newborns at Kolli Hills and later persuaded the parents to sell their baby to Amuthavalli. Sale of babies to couples took place through sub-agents.

The police registered a case under Sections 370 (2) (4) (trafficking of minor), 420 (cheating and dishonestly inducing delivery of property), 471 (using as genuine a forged document), 109 (abetment if the act abetted is committed in consequence) of IPC and Sections 80 (person receives a child without following the procedures) and 81 (person who sells or buys a child for any purpose) of Juvenile Justice (Care and Protection) Act, 2015. Amuthavalli and Ravichandran were produced in the court and lodged in prison.

Superintendent of Police Ara. Arularasu told The Hindu that three special teams were formed and steps were being taken to identify the parents who sold their wards and the couple who bought them.

Deputy Director of Health Services K. Ramesh Kumar said that 10 teams are verifying the 4,500 birth certificates issued by the Rasipuram Municipality in the last two years. An inquiry is on to ascertain the role of officials in issuing the certificates.