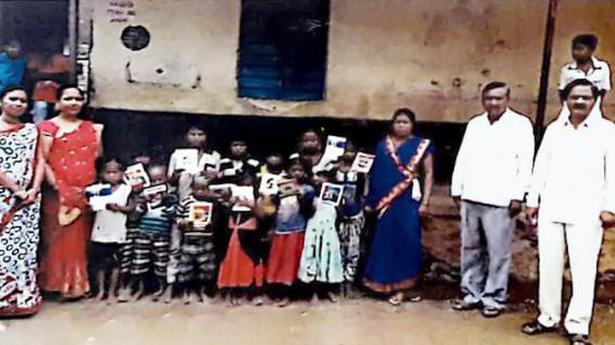 Following the report on 30 children of the Haranshikare tribal community in Sindgi taluk remaining out of the school, that was published in The Hindu on October 21, the Department of Education has taken action and got the students admitted in government schools in the taluk.

The story was based on a survey conducted by Gangadhar Sonar, Assistant Professor, Social Work Department, Karnataka State Women’s University, where he found that 30 Haranshikare children of different ages in Vidyanagar slum and Golgeri village of Sindgi taluk, were staying out the school. Since their parents are migrant workers in Maharashtra, they normally took the children to work. Owing to this, the children are unable to go to school.

After the report was published, the District Child Welfare Committee issued a notice to A.H. Naganur, Block Education Officer, Sindgi taluk, to take a note and ensure the children were admitted to a government school.

Mr. Naganur said after they got the notice, the officials visited the spot. “We met the parents and convinced them to send the children to school. Since the parents were willing, we collected details and based on the children’s age, we got them admitted in different classes in government schools of the taluk. They will be provided with books and uniforms,” he said.

Both Mr. Sonar and Sridhar Kulkarni, president of the committee, said that efforts have yielded result. “The government says that no child should be deprived of the primary education. It should make education compulsory and free for every child who cannot afford schooling. I am happy that our survey and report published by The Hindu helped,” Mr. Sonar said.

Journalist who exposed salt-roti meal in school booked by UP govt.

Days after he filmed children eating roti and salt in the mid-day meals served in a primary school in Mirzapur district of Uttar Pradesh, a local journalist was booked by police for trying to defame the government through a “conspiracy.” Pawan Jaiswal, a print reporter with a Hindi daily, was charged with criminal conspiracy, cheating […]

The RITES, a public consultancy agency, is likely to submit a Detailed Project Report (DPR) on the Machilipatnam deep sea port project in the first week of January, according to V. Balashowry, MP. Mr. Balashowry on Tuesday met RITES Limited CMD Rajeev Mehrotra in New Delhi and discussed the status of the DPR. Speaking to […]