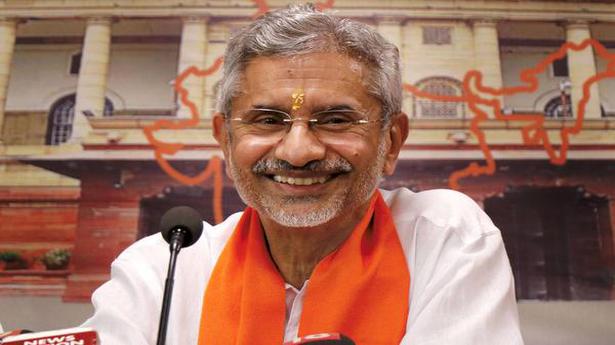 Chinese President Xi Jinping is expected to visit India this year, External Affairs Minister S. Jaishankar said in Gandhinagar on June 25 after filing his nomination papers for the Rajya Sabha poll from Gujarat.

“We expect the Chinese President to visit India this year. Even I have planned a visit to China but the date is not fixed yet,” Mr. Jaishankar said.

On India’s policy towards China, the bureaucrat-turned-politician said, “It is natural that policy changes with the change in situation. Our relations are stable after PM Modi’s meeting with the Chinese president last year.”

Talks are on to resolve other issues (between India and China), Mr. Jaishankar said.

Speaking on the India-U.S. tariff row the Minister said that India will try to find common ground on trade issues during discussions with visiting U.S. Secretary of State Mike Pompeo.

Terrorism, Afghanistan, the Indo-Pacific, Iran, trade issues, and growing bilateral defence ties will be the focus of discussions between the Indian government and Mr. Pompeo on June 26.

“We will be meeeting with a positive attitude,” Mr. Jaishankar said after filing his nomination papers.

“The meeting with Mike Pompeo will be an important one. We will definitely discuss issues related to trade between the two countries,” Mr. Jaishankar said.

“Both the countries are having their own interests. And it is natural to have some conflicts because of that. We will find a common ground using diplomacy. We will hold discussions with the U.S. with a positive approach,” he added.

Analysis| How pandemics have changed the world

Pandemics have had great influence in shaping human society and politics throughout history. From the Justinian Plague of sixth century to the Spanish flu of last century, pandemics have triggered the collapse of empires, weakened pre-eminent powers and institutions, created social upheaval and brought down wars. Here’s a look at some of the deadliest pandemics […]

Bihar’s ruling party, JD(U), has decided to contest the upcoming Assembly elections in four States of Delhi, Jharkhand, Haryana and Jammu and Kashmir on its own.  At its national executive meeting in Patna on Sunday, the party also asked its respective State presidents to start preparing for it after identifying which seats to contest there.  […]