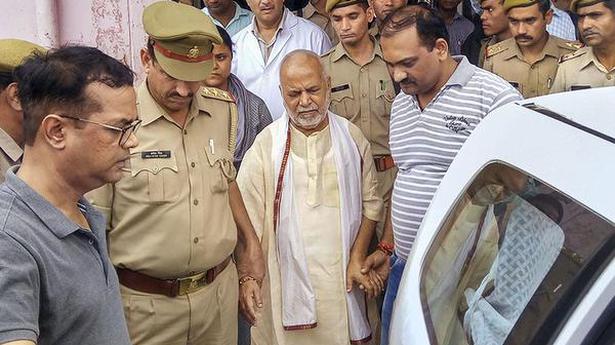 The BJP on September 25 said former Union minister Swami Chinmayanand, accused of rape by a law student of his college, is no longer a member of the party.

“He is not a member of the BJP,” the party’s U.P. spokesperson Harishchandra Srivastava told PTI.

The spokesperson, however, was not forthcoming about since when Mr. Chinmayanand has ceased to be the member of the BJP.

“All our records are now digitised and so we cannot tell from when he has not been a member of the party,” he said.

Mr. Chinmayanand was elected to the 13th Lok Sabha from Jaunpur in Uttar Pradesh as a BJP candidate in 1999 and had been a Minister of State for Home in the Atal Bihari Vajpayee-led BJP government. He had won the general elections from Badaun in 1991 and from Machhlishahr in 1998.

After the controversy erupted, no BJP leader has come forward to extend any kind of support to Swami Chinmayanand, who has been in judicial custody since September 20. Even the Akhara Parishad, the prominent body of seers, is set take a decision on expulsion of Swami Chinmayanand from the body at its meeting in Haridwar on October 10.

Akhil Bharatiya Akhara Parishad (ABAP) president Narendra Giri has told PTI, “In most of the cases like this, the seer is expelled from the Akhara Parishad until he is proven innocent.”

Last year, Chief Minister Yogi Adityanath had ordered withdrawal of a rape and kidnapping case lodged against Mr. Chinmayanand by a disciple and manager of Mumukshu Ashram run by him.

However, the chief judicial magistrate, district court, Shahjahanpur, had stalled the withdrawal proceedings after objections from the victim. The manager of the Mumukshu Ashram had filed an FIR against Mr. Chinmayanand on November 30, 2011, alleging that she was held captive, raped and assaulted for several years.

Officials of the Idol Wing CID took possession of two metal idols of Veenadhara Dakshinamurthy and Tiripuranthagar from the art gallery at the Thanjavur palace complex on Saturday, on the ground that they belonged to the Sri Brihadeeswarar Temple. The action came after Madras High Court-appointed Special Officer Ponn Manickavel and Idol Wing officials conducted […]

Can’t do charity at the cost of others, Delhi HC says while refusing plea seeking incoming services from telcos

Telecom companies also need money, the Court said in response to a PIL directing telecom companies to not block incoming services regardless of payment dues in view of the pandemic. Source: thehindu.com Related

Advising those who buy real estate property worth above ₹50 lakh to remit 1 per cent towards the TDS without fail, B.G. Reddy, Chief Commissioner of Income-Tax, Visakhapatnam, on Wednesday said that real estate transactions were under the radar of their department. Plans were afoot to serve notices on those who failed to follow the […]