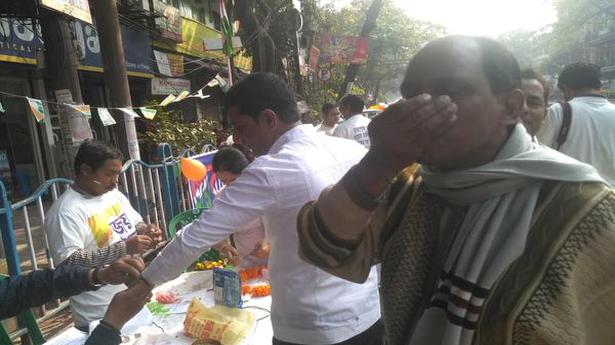 Kolkata witnessed an 11-km human chain on the Republic Day when people from all walks joined to protest against the Citizenship (Amendment) Act (CAA) and the National Register of Citizens (NRC). The chain, initially disorganised, from Golpark in the south Kolkata to Shyambazar in the north, finally came together to form one long and continuous line, with many joining at various points in the city.

Dilip Roychowdhury, retired school teacher, in Shyambazar regretted that he could not get his son or grandchild leave the television set to join the rally.

“This rally is important. We are not against identifying legal and illegal citizens but that cannot be done by attacking a social structure that evolved over hundreds of years,” said the former History teacher.

Many, however, could be seen moving away from the main human chain to join the two-week sit-in at the Park Circus, described often as Kolkata’s Shaheen Bagh.

Many could also be seen eating and distributing chire (flattened rice) as a mark of protest against BJP’s Minister Kailash Vijayvargiya’s recent comment.

On January 23, Mr. Vijayvargiya said he suspected that there were some Bangladeshis among the construction labourers who had been working at his house after he had found them eating poha (flattened rice that is called chire in Bengal). On behalf of what is a described as “a Bangla nationalist” organisation, a group assembled about 50 people in Shyambazar who ate and distributed flattened rice.

“If for having chire we can be identified as Bangladeshi, then we all are from Bangladesh,” said Prasenjit Dey of the organisation, Bangla Jatiyatabadi Sangathan.

“Let them throw us out. I have filed an RTI against all major State and national [BJP] leaders a few days back, seeking proof of their citizenship. Let them first furnish their papers before harassing us,” Mr. Dey said. The organisation members later joined the human chain at Shyambazar.

Both Hindu and Muslim community members could be seen tying Rakhi, as a mark of friendship. The day did not pass without minor scuffles between the supporters of the TMC and the BJP.

The BJP alleged that their supporters were manhandled by the TMC in Howrah district for “worshiping Bharat Mata”. In Panihati in the North 24 Paraganas, a BJP supporter was roughed up, the party alleged.

After a false start over nomenclature, the Congress has kickstarted a long-term training programme for its cadre to ensure a continuous engagement where the party line could be laid out and clarified as opposed to engagement dictated by the election calendar alone. Christened as Congress Worker Development, the programme ran into trouble on Thursday last […]

18% quota was fixed based on the 1971 census, he says Source: thehindu.com Related

The State witnessed an unprecedented gold rush through all its international airports in the just-concluded financial year going by the statistics drawn up by the Customs Department. The number of cases for gold smuggling went up from 242 in 2017-18 to 1,102, an increase of 455%. The quantity of gold seized also made a quantum […]