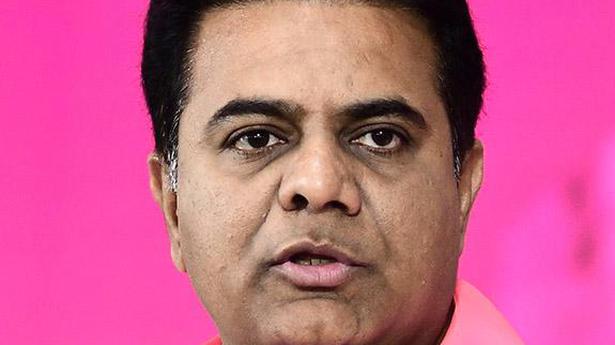 Mr. Rao warned that any effort to incite trouble in the city will be crushed with an iron hand and the TRS will not let anyone put spokes in the growth path of the city

The TRS working president, K.T. Rama Rao sold a peaceful, progressive and prosperous Hyderabad to the people and asked them if they wished a peaceful city or willing to adopt the agenda of divisive, desperate and communal politics of the Bharatiya Janata Party (BJP).

At a ‘Meet the Press’, orgnised by the Press Club Hyderabad ahead of the Greater Hyderabad Municipal Corporation (GHMC) elections, he asked the people to choose a party that had hunger for development of Telangana and Hyderabad and not the ones with a pure agenda of hatred politics.

Mr. Rao warned that any effort to incite trouble in the city will be crushed with an iron hand and the TRS will not let anyone put spokes in the growth path of the city.

Revealing a series of developmental programmes taken up by the government, he challenged the opposition parties to prove him wrong. “The development in the last six years is unprecedented on all fronts and we will go to the people with the same agenda and seek their favour,” he said.

He said the TRS dispelled the perceived fears of Hyderabadis, once Telangana was formed, on law and order, IT sector growth city infrastructure creation with sincere and hard work. Four of the top IT big players of the world set up their centres in the city after the TRS came to power as they had faith in the TRS government and its policies. “It took lot of effort from the government to bring them and they did not just slide into the city,” he said.

Mr. Rao also took potshots at the political parties criticising them on flood relief. He claimed that TRS Ministers and MLAs visited the people affected by the once-in-a-century rains and the subsequent flooding regularly. “All the opposition leaders were sitting in their homes while we were among the people,” he said.

Continuing with its poetic praise on its personnel, the Indian Air Force on Sunday described Wing Commander Abhinandan Varthaman as someone who “hunted the hunter”. Posting a poem on its official Twitter handle @IAF_MCC, ‘Sabke Bass Ki Baat Nahi’, written by Bipin Allhabadi, the IAF described the fighter pilot’s feat as something that is not […]

Twin districts considered one unit for movement of people