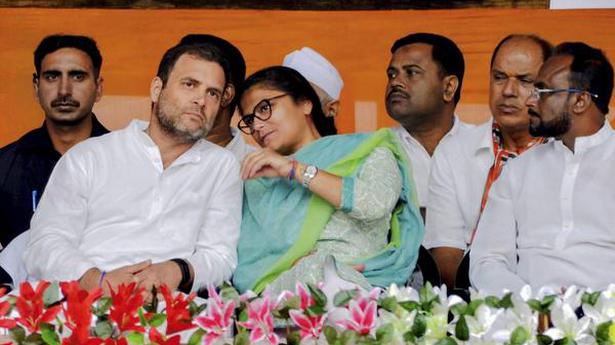 Congress president Rahul Gandhi on Tuesday called Prime Minister Narendra Modi a “thief and a coward” who runs away from a direct debate with the leader of the main Opposition party.

Launching a tirade against Mr. Modi, the Congress leader alleged that the Prime Minister’s schemes had benefited only rich businessmen like Anil Ambani, Mehul Choksi and Nirav Modi.

“The chowkidar [watchman] is not only chor [thief], but also a coward. As he talks about corruption, I told the chowkidar to debate with me. He does not have the guts and fled away.

“He fled away because then Rafale… ₹30,000 crore to Anil Ambani will also be discussed. I had asked him why an aircraft worth ₹526 crore was bought for ₹1,600 crore… and he ran away,” he told a public rally in Hailakandi, Assam.

Reaching the venue almost two hours late by road instead of a helicopter from Silchar airport as planned due to heavy rain, Mr. Gandhi cited media reports to claim that the Modi government gave money only to rich people like Anil Ambani, Mehul Choksi and Nirav Modi and not to the poor.

“Narendra Modi ran the government for five years to benefit only 15 people… he gave money non-stop to the richest people of the country. After Congress comes to power in 2019, the headlines in newspapers will be about poor people getting money,” he added.

Mr. Modi, he claimed, made false promises of creating two crore jobs every year, giving fair price to farmers for their produce and depositing ₹15 lakh in everyone’s bank accounts.

“The chowkidar took away your money by demonetisation and GST. The keys to the banks were handed over to thieves like Anil Ambani.

“Once we come to power, we will snatch that key from Anil Ambani and give it to the youths of the Barak valley,” he said at the rally in Assam’s Barak valley region.

The Congress has promised to deposit ₹72,000 annually into the bank accounts of 20% of the poorest people across the country, irrespective of region, religion and caste.

Calling the minimum income guarantee —‘NYAY’ — proposed by the Congress a historic initiative, he said no government in the world has ever attempted such a step.

“The money will go to women’s bank accounts.… men may not like it, but we have taken the decision. This is a surgical strike on poverty and will change India’s economy,” he said.

The Congress president said the beneficiaries with income that is less than ₹12,000 a month will receive ₹3.6 lakh each over five years.

It does not matter from where you are, which community you belong to or what is your caste, he said.

Mr. Gandhi said soon after a Congress government is formed, it will work towards 33% reservation for women in the Lok Sabha, the Rajya Sabha and State Assemblies.

He said the Congress, which is contesting Lok Sabha polls in Assam alone, will win single-handedly and ensure that no genuine Indian citizen is left out of the National Register of Citizens (NRC).

“The Congress needs youth leaders from Assam. Sushmita is a national level youth leader who is the president of the Mahila Congress. Please support youth leaders as we need youths as Ministers also,” he added.

He said his party wanted to make Barak valley the business hub of the Northeast.

“We want to link Barak valley and the Northeast with the rest of India and Asia and make it a centre of manufacturing, transport, logistics and education,” he said.

Mr. Gandhi was campaigning for Sushmita Dev and Swarup Das —Congress contestants from the two Barak valley seats of Silchar and Karimganj (SC).

Plain-clothes police personnel were on the JNU campus when students were assaulted by an armed gang, student activists said. Eyewitnesses maintained that they spotted a large collection of armed men with faces covered in handkerchiefs stationed outside the Periyar hostel and policemen in civil dresses were standing nearby when the mob began pelting stones at […]