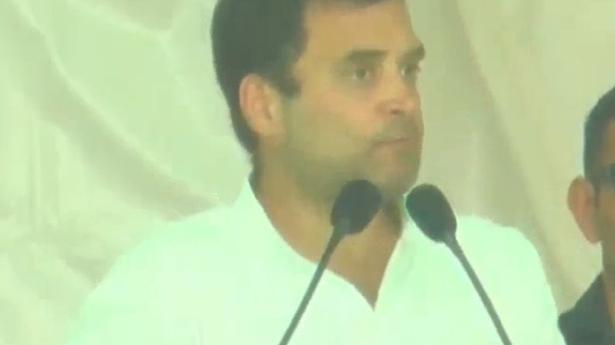 Congress president Rahul Gandhi on May 8 said neither he nor his party coined the chowkidar chor hai slogan, and attributed the jibe to the youth and farmers.

Addressing a poll rally in Bhind, Mr. Gandhi attacked Prime Minister Narendra Modi over the Rafale deal, claiming the latter ensured that a “thief”, industrialist Anil Ambani, got it.

“Mediapersons asked me today about the genesis of the chowkidar chor hai slogan. I told them that while addressing a rally in Chhattisgarh, I said the chowkidar promised 2 crore jobs to the youth and assured ₹15 lakh will be deposited in bank account of each Indian. Around 10-15 young men in the rally said chor hai.

“I did not hear it the first time. So I asked (the young men) what did you say? They said ‘chor hai’. This slogan was not coined by the Congress, or by Rahul Gandhi but it is a slogan of the youth, farmers and labourers of India.”

Mr. Gandhi said he would prefer to die rather than make false promises to the people.

The Congress chief’s remarks came on a day he tendered an unconditional apology in the Supreme Court for wrongfully attributing to the apex court the chowkidar chor hai remark in the Rafale verdict.

At the Bhind rally, which comes ahead of the remaining two phases of Lok Sabha polls in Madhya Pradesh, Mr. Gandhi also talked about the party’s Nyay minimum income guarantee scheme that envisaged giving ₹72,000 per year to 5 crore poor families of the country.

“Nyay scheme will jump-start the economy,” he said.

He said the Congress, if voted to power, will ensure farmers are not jailed for failure to repay loans.

The Congress chief also assured that 22 lakh vacant government posts will be filled within a year if his party is propelled to power.

The Opposition on Sunday criticised Chief Minister Devendra Fadnavis for continuing with his political campaign despite many parts of the State being flooded due to incessant rains. State Congress campaign committee chief and former MP Nana Patole asked Mr. Fadnavis to return to Mumbai and control the situation, warning that if he failed to do […]

As many as 37,066 students qualified in the APECET-2019. The Andhra Pradesh Engineering Common Entrance Test was conducted for diploma holders for admission into 13 branches of professional courses like engineering and pharmacy on April 30, said AP State Council for Higher Education (APSCHE) Chairman Prof. S. Vijaya Raju, announcing the results here on Monday. […]

Two persons were killed and seven injured in a clash between two intermediate caste groups at Kailasapatti village, near Periyakulam, in Theni district on Monday. Sources said that enmity had been simmering between the two groups over various issues in the village. Earlier, one of the groups had lodged a complaint with the police against […]