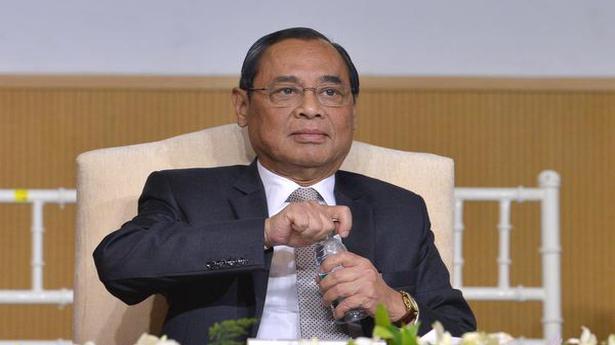 Chief Justice of India (CJI) Ranjan Gogoi, set to retire on November 17, has less than 10 working days left and at least five judgments, touching on topics as diverse as religion, defence and politics, to deliver.

The most awaited among them would be the verdict of the Constitution Bench led by him in the cross-appeals filed by Hindu and Muslim parties for ownership of the disputed 2.77 acres of Ramjanmabhoomi-Babri Masjid land.

The marathon 40-day hearing was wrapped up by the Bench, which had Justice S.A. Bobde – recommended as the next CJI – on October 16. The verdict would decide whether the Allahabad High Court was right in dividing the land among deity Ram Lalla, Nirmohi Akhara and the Sunni Waqf Board in September 2010.

Again, a Review Bench of five judges led by Chief Justice Gogoi is expected to either uphold or set aside its September 2018 majority judgment, which lifted the bar on menstruating women from worshipping at the Sabarimala temple in Kerala. A whopping 65 petitions were filed challenging the authority of the Court to intervene with a “centuries-old” belief that the Sabarimala deity is a “Naishtika Brahmachari”, whose penance should not be disturbed by the entry of women worshippers of the menstruating age of 10 to 50 years.

The Chief Justice was also at the helm of the Bench that reserved judgment on a joint review petition filed by advocate Prashant Bhushan, former Union Ministers Arun Shourie and Yashwant Sinha in the Rafale fighter aircraft deal on May 10. One of the main issues raised in court during the hearing was why the CBI failed to register an FIR on a corruption complaint filed by the petitioners in October last year in connection with the 36 jets deal. The review plea alleged that the government misled the court into delivering its December 14, 2018 judgment upholding the agreement.

But the government had argued that the court enjoyed limited jurisdiction over government policy. In the Rafale deal, the Centre had taken a “conscious decision” to go ahead with the procurement of the jets.

The same day, on May 10, saw the Bench led by Chief Justice Gogoi also reserve for judgment on a criminal contempt plea filed by BJP leader Meenakshi Lekhi against Congress leader Rahul Gandhi, who has unconditionally apologised for wrongfully attributing the phrase ‘chowkidar chor hai’ to the apex court. Mr. Gandhi had made the remark to the media in reaction to a Supreme Court verdict on April 10 allowing the maintainability of the Rafale review petitions.

A Bench led by Chief Justice Gogoi has also reserved its judgment on a batch of pleas challenging the constitutional validity of the Finance Act, 2017 on the ground that it was passed by Parliament as a Money Bill.

Rich and powerful trying to run the court, they are playing with fire: Justice Arun Mishra

In a passionate defence of the Chief Justice of India (CJI) and the institution they serve, Supreme Court judge Justice Arun Mishra on Thursday said there were rich and powerful people who thought they could bludgeon and blackmail the court into submission, but little did they know that they were playing with fire. Justice Mishra’s […]

: The Supreme Court on Thursday gave the Union government four weeks’ time to respond to a petition filed by advocate M.L. Sharma to quash the allotment, extension or continuation of leases for firms to operate 358 iron ore mines across the country. A Bench led by Justice S.A. Bobde asked the Centre to reply […]

Pension given to elderly persons at doorstep